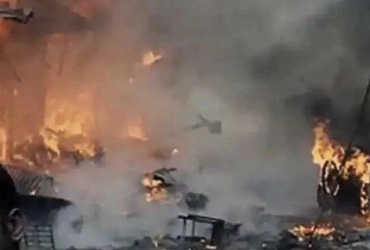 Lahore, Ta. 13
The grenade attack took place when Shia Muslims were marching in Bahawalnagar in Pakistan’s Punjab province. Three people were killed and at least 60 wounded in what became known as the Cold War. The attacker was immediately arrested by the police. Tension has increased in Punjab after the incident.
Shia Muslims were taking out a procession on the occasion of Muharram in Bahawalnagar in Pakistan’s Punjab province. An assailant hurled a grenade at the procession as it exited the densely populated city. A total of three people, including a seven-year-old girl, died on the spot in the attack. The police immediately arrested the attacker. A Punjab Police official said that the investigation into the incident has been started.
More than 60 people were injured. When the injured were shouting for help, instead of helping them, people kept on downloading the videos. The video of this incident also went viral in Pakistan. After the attack on the Shia community, Shia community leaders demanded immediate action against the attackers. Shia leaders of Pakistan have also demanded the government to increase security throughout the country during the Shia procession.
Following the attack, local governments in Pakistan immediately shut down Internet services in cities other than Bahawalnagar as tensions between Shia and Sunni communities grew. Bahawalnagar was trending on Pakistan’s social media. People put posts in favor of Shia community. People from the Shia community held rallies across the country and criticized such incidents on social media. However, due to tension in cities like Karachi, Hyderabad, Quetta, Sukkur, internet service was eventually stopped.