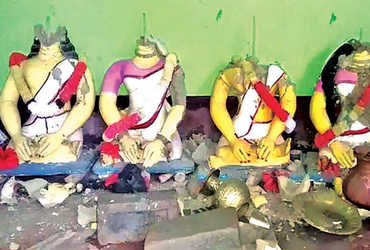 Attacks on temples increased in Bangladesh after Pakistan

Uproar over the imam of the mosque, Hindus prevented from going to the temple, bhajan kirtan, police convoy deployed

There was a fierce fight between Hindus and Muslims in Shaili village here on Friday night. After which the mob of Muslims ransacked Hindu temples and houses. The first target was the style of the Mahashamshan temple here.

Where the idols kept in the temple were broken. Later, Hari Mandir, Durga Mandir and Govinda Mandir were also vandalised. Six shops and around 100 houses of all Hindus were also ransacked.

According to the Shrutnik report, four temples were vandalized in a single day. Police have been deployed in the entire area. From here the Hindus were going to the temple instead of doing kirtan bhajans. A mosque came in the middle, during which they were also singing hymns.