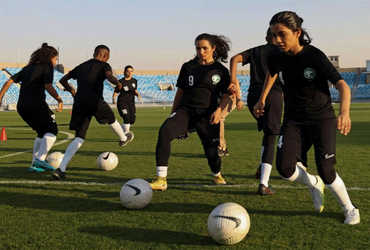 – Flow of change in a conservative country

New Delhi: Saudi Arabia has launched reform programs for women for the past several years. One of these is allowing girls and women to play football. Therefore, since November 8, a “women’s football league” is being formed in the so-called conservative country. It is becoming a ‘festival-like’ day for Saudi girls and young women. His decade-old “beautiful dream” has come true.

Saudi Arabia is a country where women still do not enjoy the basic rights of freedom, but the women-football-team making process has seen a change in the basic attitude of that country.

It is also noteworthy at this stage that, Ta. On 9 November, Saudi Arabia, on the one hand, formed the ‘National Women’s Football Team’, while India’s ‘Muslim Personal Law-Bard’ refused to accept the ‘Equal-Citizens Act’ in India for Muslims of India. Gave. , talking like turning back.

Saudi Arabia also wants to train the team according to international standards by creating a women’s football team. So that he can successfully participate in world-class football competitions.

It is well known that the whole world has been calling Saudi Arabia a very conservative country, due to which the country has also come under sharp criticism. Thus, the Arab-monarchy has decided to bring the women of their country to the forefront of global sports such as football. However, some conservatives say that Saudi Arabia is tarnishing its own image. The country, on the other hand, is trying to clean up its tarnished human rights record.

In fact, Saudi Arabia had to initiate reforms, because on the one hand there was extraordinary pressure from the West, on the other, there was intense pressure from women activists in their own country.