For the first time, the exercise between India and Saudi Navy will increase crop tension. 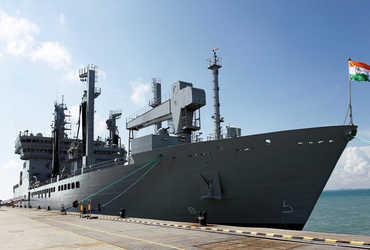 For the first time, war games are taking place between the Indian Navy and the Saudi Navy, considered the most powerful country in the Gulf.

With the expansion of economic ties between the two countries, the message that both the countries are now keen to increase their partnership in the field of defence, will be conveyed to the world through this exercise. It is certain that this will increase the tension of the Pakistani government.

Militarily, Pakistan has been close to Saudi Arabia so far. The exercise between India and Saudi Arabia has been dubbed Al Mohammed Al Hindi. Indian Navy’s powerful warship INS Kochi has reached Saudi Arabia to take part in it. The ship recently conducted a maritime exercise with the UAE Army in the seas of Abu Dhabi.

The study will now begin at sea between Indian and Saudi warships on Wednesday. Earlier, the Indian warship was given a warm welcome by the Saudi Navy. All eyes are on the study taking place amid the tension in the Gulf.

Earlier, a tanker of an Israeli company was attacked with a drone near the coast of Oman. In which two civilians died. There was speculation that Iran was involved in the attack.

Defense ties between India and Saudi Arabia are getting stronger. Earlier, Indian Army Chief General Naravane had visited Saudi Arabia. India’s army chief reached Saudi Arabia for the first time and there was a stir in Pakistan.