For the first time in the world, a robot created history by performing surgery without human help. 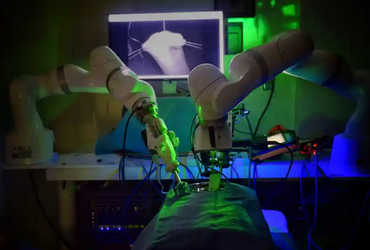 A robot developed by researchers at Johns Hopkins University in the US has created history for the first time by performing surgery without human help. This is the first time a robot has performed medical surgery. The robot performed laparoscopic surgery on the pig’s body without any errors.
Professor at Johns Hopkins University in the United States, Dr. Successful robotic surgery experiments were led by Axel Krieger. A robot created by Johns Hopkins University performed laparoscopic surgery on a pig’s body without a single defect. This is the first time in the world that robotic surgery has been done without human assistance. The robot had four operations. All four experiments were successful. The robot attached the pig’s intestines. University researchers have named the robot Smart Tissue Autonomous Robot (STAR).
The researchers concluded that the robot operated better and more comfortably than humans. Professor Axel Krieger said it was a revolutionary experiment. So far the robot has not been able to function flawlessly without human assistance. Robotic operation was done for the first time with zero error without human help. This has opened the door for robots to help prevent human error.
Researchers have found that abdominal enlargement surgery is very delicate. The robot did this job well. After this success, the possibility of robotics operations in the future will increase and the operation will be automated.