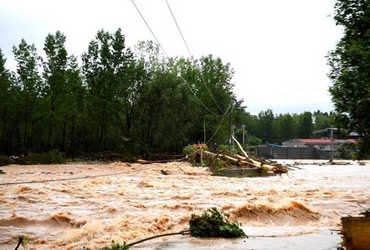 In central China, the death toll from a devastating rain has risen to nine in 1,000 years, with eight people missing. Apart from this, two million people have been affected by torrential rains in Henan province, while 2.5 million people have been evacuated. The rains have destroyed crops in an area of ​​about 2.15 lakh hectares and directly affected the economy at an estimated cost. The deficit was 1,300 million (1.2 billion yuan, US 12.5 million).

The Chinese Meteorological Agency called the torrential rains in Henan province and its capital, Zhengzhou, the worst disaster in a century. Underground subway tunnels in China’s capital, Zhengzhou, were flooded after torrential rain for the first time in 1,000 years. However, rescue operations in Zhengzhou were temporarily halted as rain had temporarily stopped during the day. Many tourists were stranded at Zhengzhou Eastern Railway Station, which has a capacity of 500 trains per day. Many tourists were shifted to a safer place in the city.

Many roads in Zhengzhou city were flooded with rain-soaked cars, while some low-lying areas were still waterlogged. The city’s busiest roads remained closed.

In Henan province, China’s most important agricultural region, rain has caused heavy crop damage on an estimated 2.15 lakh hectares of land. The Ministry of Finance has allocated 13 million to support local flood control and relief efforts. Rescue teams from seven provinces have moved to central China.

Heavy rains have caused landslides and flooding in many places in Henan province. The Meteorological Department has predicted heavy rains in the state in the coming days. Amid the disaster in Henan province, Zhengzhou hotels drastically reduced prices for stranded residents and distributed food packets and water to those in need. A theater had sheltered hundreds of people from the rain. Donations for relief work have flown into Henan province. Many companies have distributed food packets and necessities to the people.

14 killed in floods in southern China

Heavy rains last week in southern China’s Guangdong province killed 12 workers trapped in an under-construction tunnel, state media said on Thursday. The Shijingshan tunnel is under construction as part of the Jingye Expressway in Zhuhai city of Guangdong province, where several workers were trapped after heavy rain on July 15. More than 2,500 rescue workers and over 200 rescue vehicles were dispatched to the scene to rescue the stranded workers. However, the rescue operation was difficult due to the narrowness of the tunnel and the complex hydrological, geographical and weather conditions.

Millions of people are stranded in the central Chinese province of Henan due to the torrential rains that have been scarce for centuries. Heavy rains have disrupted power and disrupted telecom services. It was at this time that China deployed its indigenous military drones for relief work. For military purposes the drone Wing Loong was used as an aerial communications relay platform during the disaster. At least 50,000 people have been killed in two rivers flooding in Mihe County, Zhengzhou City. The Wing Loong Drew traveled 1,200 km in four and a half hours, providing disaster information to local residents in the mission area for nearly eight hours, as well as reuniting families with their victims. Simultaneously the drone surveyed geological hazards with synthetic aperture radar and also provided imagery data to the system in monitoring the disaster situation.