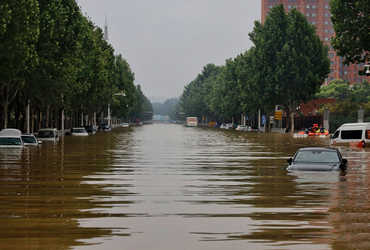 As Indradev has become angry all over the world, many areas including Europe, India, China and Taiwan have received torrential rains. The death toll from rain-related incidents in China’s industrial province of Zhengzhou has risen to seven, and the economy is estimated at Rs. The loss was Rs 3,600 crore (૧૦ 10 billion). Apart from this, coastal areas of southern China and Taiwan will be hit by ‘In-fa’ on Sunday evening or Monday. The current storm is 40 kmph. The momentum is moving towards China.

Chinese state media said on Friday that the death toll from the first torrential rain in Henan province had risen to five and five people were missing. Rescue operations are still ongoing, including drainage in the Jingguang Road tunnel in Zhengzhou, the capital of Henan province. The provincial emergency management department said several vehicles were stranded here since Tuesday.

China Daily quoted a local authority as saying that the direct damage to the country’s economy due to the rains is Rs. 3,600 million (4.5 billion yuan, US 10 billion). Life is returning to normal in Zhengzhou. However, hundreds of people are still trapped in the flood waters. The emergency level has been lowered in Zhengzhou, but more heavy rain is forecast in other areas of Henan province. According to the news agency Xinhua, more than 5,000 soldiers have been deployed in 10 different danger zones.

The Meteorological Department has predicted torrential rains in the coastal areas of Taiwan and China after Hurricane In-fa. Hurricane In-fa is moving towards China at a speed of 30 kmph. It is likely to strike in Zhejiang province on Sunday afternoon or Monday morning. Emergency management has issued the second highest level of warning after the possibility of a storm. As per the current track, Hurricane In-fa is expected to pass through northern Taiwan.

Meanwhile, Europe has been badly hit by the rains. Floods in some European countries last week cost the national rail network about Rs. Germany’s national railway operator said on Friday that the damage was 11,500 million (€1.2 billion, US 1.6 billion). The most affected areas are West Germany and East Belgium. German Chancellor Angela Merkel said the country had suffered “extraordinary damage” and it would take a long time to recover.

The death toll from the floods has risen to 211, including 120 in Germany and 21 in Belgium. German railway operator Deutsche Bahn said more than 50 pools, 150 level crossings, about 40 signal boxes, more than 1,000 electric and signal masts as well as energy and lighting systems and station lifts were damaged.