Five-G launch in US: Flights canceled 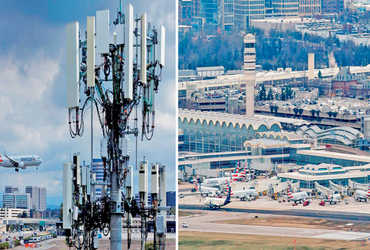 Thousands of tourists stranded due to cancellation of many flights, outrage

At present, airlines will suffer heavy losses due to cancellation of flights due to non-adjustment of five-G C-band.

New York: Thousands of tourists from many countries including India were surprised by the cancellation of thousands of flights due to the introduction of five-G service in America. From India, Air India canceled eight of its flights to the US. Apart from this, other international airlines and American airlines also had to cancel their flights.

Indian aviation regulator DGCA chief Arun Kumar said they were working to address the issues raised by the launch of Five-G in the US. In this way, the travel plans of thousands of tourists were ruined due to the cancellation of the flight. The cancellation of the flight has dealt a big blow to the hopes of Indians living in Thanga as their families could not be reunited due to two years of Corona. In this way, the chaos seen in hospitals during the Corona period in America is now visible at airports and flights are being cancelled. Many passengers are protesting their airlines, while airlines are blaming aviation regulator Federal Aviation Administration (FAA) for the failure.

US aviation regulator, the Federal Aviation Administration (FAA), said on January 19 that Five-G could disrupt an aircraft’s radio altimeter and prevent the engine and braking system from entering landing mode. This can make it difficult for the plane to land on the runway. The altimeter measures how high the plane is above the ground. Currently American Airlines, Delta Airlines and Air India operate flights between India and the US.

Apart from Air India, some other airlines have also canceled flights to the US. Including Emirates. It has canceled flights from Boston, Chicago, Dallas, Fortworth, Houston, Miami, Newark, Orlando, San Francisco and Seattle.

In addition, some other airlines are demanding that the US government delay the adjustment of C-band spectrum to new five-G connections. Until it descends with increasing safety and security so as not to affect the altitude of the aircraft. The radio altimeter is an important technical property of aircraft. It handles multiple tasks. Based on this, the pilot can safely fly the airplane. Its usefulness increases during critical phases of flight. CEOs of major US airlines have said that if the issue is not resolved soon, the transportation front will be hit hard.

If the problem of Five-G is not resolved immediately, it will have an impact on the airlines industry.

Successful launch of Five-G in 40 countries, what is the problem in America?

Telecom giants AT&T and Verizon have agreed not to launch Five-G at some airports, disrupting flights due to the launch of Five-G in the US, but have also strictly stated that if What will happen in America if Five-G is successfully launched in America? 20 countries. fallen.

Expressing disappointment over the performance of the Federal Aviation Authority (FAA), the telecom company said that if governments of 20 countries can launch Five-G without any harm to their airlines, then why do we need such a situation.

These companies expressed disappointment at the FAA’s performance. “The FAA could have taken the matter to us earlier,” the company said.

The problem is that the frequency range of the five G’s is higher than that of the four G.

How does Five-G technology interfere with aviation?

– There is a danger of crashing because the critical equipment of the aircraft is also operating at the same frequency.

Against this, telecom companies say that the higher the frequency in the spectrum, the faster the internet service will be. Verizon and AT&T argue that 20 other countries have no problem using C-band 5G services. The two companies have agreed to create buffer zones at about 50 US airports.

However, the logic of telecom companies is misleading. Because the standard of Five G is different elsewhere. In the standards set in Europe in 2016, the mid-range five-gene limit is set at 7.5 to 7.5 GHz, so airports in 6 countries in Europe are not a problem. Five G frequencies in South Korea are also set at 6.5 to 7.5 GHz.

Five G operates on the same frequency in France. In the US, the frequency is set at 6.5 to 7.5 GHz, and in France, the power level set for five G is lower than the US-allocated power level. Verizon said it would not use higher band frequencies for several years, but the airlines did not agree.