Firing in Kabul two days after serial blast, atmosphere of fear all around 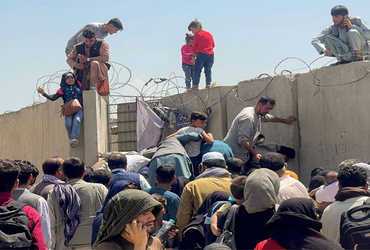 Firing is happening in Kabul. People are in danger from firing. The deadly game of terrorism continues in Afghanistan.

The US has said it fears more terrorist attacks at Kabul airport. The US has asked its citizens to stay away from Kabul airport. However, despite warnings, a huge crowd has gathered outside Kabul Airport.

The US retaliated against ISIS-K within 36 hours of the Kabul attack. The US Army has started a major operation in Afghanistan. In response to the Kabul explosion, US forces launched air strikes on ISIS-K positions in Nangarhar province. The US military says a car bomb exploded at an Iraqi police recruitment center in Kisak, west of Mosul.

US President Joe Biden has fulfilled what he said after the Kabul attack. The US has asked people to exit Kabul airport after the airstrike. The death toll in the August 26 Kabul serial bombings has risen to over 200.

The US Air Force carried out drone strikes in Nangarhar, Afghanistan and destroyed ISIS positions in Khorasan. This has been confirmed by the Pentagon. US Air Force bombed ISIS UAV and buried ISIS terrorists.

The US has claimed that the mastermind of the Kabul attack was killed in the airstrike. The US military says a car bomb exploded at an Iraqi police recruitment center in Kisak, west of Mosul. An unmanned aerial vehicle has been launched in Nangarhar province of Afghanistan. We have not received any information of any civilian death.