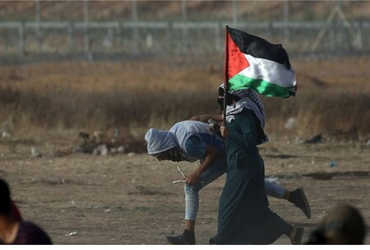 The Palestinian terrorist organization Hamas and Israel have clashed again.

Israeli forces bombed a Hamas weapons depot in the Gaza Strip on Sunday morning. Earlier, 25 people were reported injured in violent demonstrations near the border fence.

In Gaza, Hamas demonstrated on Saturday to protest an Israeli blockade, with thousands of people participating and violence erupted.

Thousands marched across the fence between Israel and Gaza, with Israel accusing them of throwing burning tyres, stones and explosives at soldiers. Then the Israeli soldiers opened fire.

According to Gaza’s health ministry, four Palestinians were wounded in the shootings.

On the other hand, an Israeli soldier has also been shot dead and Israel says his condition is critical. Following the violence, Israeli warplanes dropped bombs on Hamas’ weapons depots.

Earlier in May, 254 people were killed in clashes between Israel and Hamas.