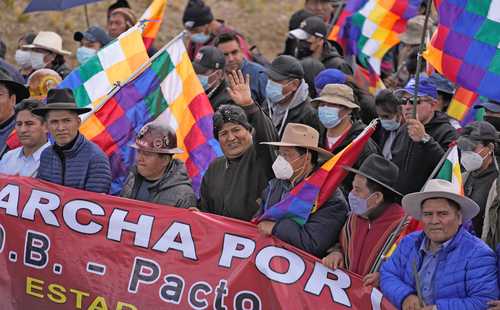 ▲ Bolivian President Luis Arce and former President Evo Morales (center) left the town of Caracollo yesterday in a caravan that will travel about 200 kilometers to La Paz. They are accompanied by political, social and worker leaders. They are marching in response to nearly two weeks of protests against the current administration.Photo Ap

Snail. Among multicolored flags, traditional music and Andean rituals, the president of Bolivia, Luis Arce, and former president Evo Morales yesterday led the first section of a massive seven-day walk in favor of the government, which will cover almost 200 kilometers, from the town of Caracollo to the capital La Paz, after almost two weeks of anti-government protests in the country that led to the repeal of some laws.

A people marches because they want to be heard. Those who have lost at the polls want to win in another way, Arce harangued, referring to the opposition at the beginning of the March for the Homeland, which was joined by Vice President David Choquehuanca, the leaders of the Senate, Andrónico Rodríguez, and of the Chamber of Deputies, Freddy Mamani.

With the Andes mountains in the background, members of unions related to the Movement for Socialism (MAS) and other social organizations undertook the long walk along the route waving Bolivian flags and wiphalas (banner of the peoples of the highlands). In addition, they wore typical costumes of colorful fabrics, ornate hats, mining helmets and the traditional sacks in which Aymara and Quechua carry their belongings.

Huge banners stood out in the one-kilometer-long caravan, some with images of Arce and Morales, as the crowd shouted slogans in favor of their leaders. Some detonated pyrotechnics in celebration.

Lucho, you are not alone! The right will not pass! We are defending democracy, were some of the slogans chanted by the marchers.

The caravans will leave from different parts of the country to La Paz, where they will demonstrate their support for the presidential cabinet on the 29th of this month in front of the headquarters of the Plurinational Assembly of Bolivia. The Minister of Government, Eduardo del Castillo, reported that the police contribute to the protection and physical integrity of all protesters, as well as those who decide to mobilize peacefully in the country.

Morales denounced that the opposition will attempt new coups – like the one he experienced after the 2019 general elections – because they cannot win at the polls. He recalled that thanks to the people’s conscience, democracy was recovered in the October 2020 elections, when the MAS won with more than 55 percent of the vote.

On Monday 29 we are going to blow up La Paz, we are going to demonstrate the strength of the change process, said the former president, who the day before was declared a person not welcome by the Peruvian Congress, which accuses him of interference in its affairs.

The march in support of the government was called by Morales on the 12th, after, encouraged by the opposition, street vendors, transporters and small merchants staged marches and protests throughout the country for almost two weeks against the law 1386 to fight against illicit proceeds, which was found to be confiscatory.

The government repealed the initiative, which according to experts sought to expose illegal financial operations, some related to payments to the perpetrators of the violent acts related to the coup in 2019.

The government will rethink the bill, given that international commitments oblige the Bolivian State to combat money laundering.

The South American country has experienced a deep political division since 2019, when Morales was ordered by the military leadership to resign, amid protests promoted by the opposition that, without presenting evidence, accused him of electoral fraud in the elections in which he won a fourth mandate.

Former president and opposition leader Carlos Mesa tweeted: our homeland is humiliated at the international level by the actions of Evo Morales, the fugitive dictator who makes fun of brother peoples, does not respect the sovereignty of the states and continues to lie about the false coup for Launder Your 2019 Fraud.