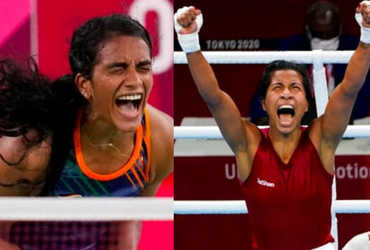 India’s men’s hockey team beat Japan in the quarterfinals, Deepika in archery and Bhaker out in shooting

Tokyo: Today was a good day for India in the Olympics. Women’s boxer Lovely Ki Borgohain defeated Chen Nien-Chin of Taiwan in the quarterfinals to claim at least a bronze medal.

However, he said that his goal after the match is a gold medal. Similarly in badminton PV. Keeping her medal hopes alive, Sindhu defeated Japan’s Yamaguchi 21-13, 22-2 in the quarterfinals to enter the semi-finals.

In hockey, the Indian men’s team continued their form by defeating Japan 5–3 in a group match to reach the quarter-finals in Pool A and finish second. However, Deepika Kumari lost in individual women’s archery and in shooting doubles to Manu Bhaker. Even in the women’s 100m, India’s Duteichand was the last player to be eliminated from the competition.