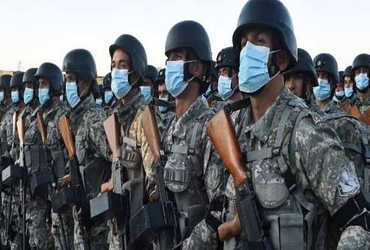 Dushanbe, T. 23
The Taliban scare has given Tajikistan unprecedented security along the border. The President of Tajikistan has ordered the deployment of 2.5 million troops to the Afghan border.
Neighboring countries have expressed concern about the Taliban’s occupation of the Afghan border. Afghan security posts have been strengthened by Taliban militants, especially in Tajikistan, Turkmenistan and Uzbekistan.
Tajikistan and Afghanistan share a border of 15 km. Tajikistan’s President Emomali Rakhmon has deployed 2.5 lakh troops to the border. Not only this, 40,000 soldiers have been deployed in the capital Dushanbe.
For the first time since Tajikistan broke away from the Soviet Union, such a large number of troops have been deployed along the border and in the capital. The President has also directed the army to investigate all weapons and take action to reduce them. Apart from the Army, the Air Force has also been instructed to be ready.
The President said in a TV interview that the situation in the neighboring country of Afghanistan is deteriorating day by day. Keeping this in mind, the Tajik government is doing everything possible for the security of the country. Under this, troops have been deployed on the border and in the capital.