Fearing Taliban, half a million Afghans ready to leave the country 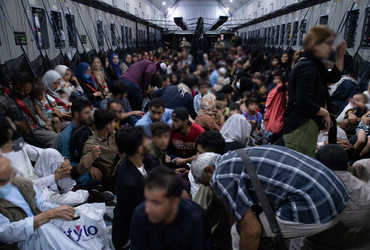 At least 200 people were killed and hundreds injured in two Islamic State (IS) suicide bombings outside Kabul airport, and despite the Taliban regime’s campaign to evacuate thousands of people who fled the country, the United States has More attacks by IS have been warned. Then. The United States has evacuated one million people from Kabul. The UNHRC claims that half a million Afghans want to flee the country for fear of the Taliban. He urged Afghanistan’s neighbors to keep their borders open so that those who cannot leave the country from Kabul airport can take refuge in the neighboring country. ISIS, on the other hand, claimed responsibility for the attack, saying it targeted American soldiers and Afghans.

The Islamic State (IS) branch of IS, which claimed responsibility for the attack on the Kabul airport, said on Friday that it carried out the attack targeting US troops and its Afghan allies, the Taliban. The terrorist group also released a photo of the attacker who attacked the Kabul airport. The photo shows the alleged attacker standing with explosives in front of a black IS flag. However, the terrorist group’s statement did not mention any other suicide bomber or gunman. IS’s claim is yet to be confirmed.

IS-KA calls Taliban a traitor to peace talks with US. He said his suicide bomber managed to cross Taliban security posts near Kabul airport and reach US troops.

Afghan officials have expressed fears that the death toll in Thursday’s attack outside Kabul airport could rise. An official said 117 people, including six Afghans, were killed in the attack. Hundreds of people were injured in the attack. Many of the dead have not been identified.

Meanwhile, the United States has warned of more strikes as the deadline for the withdrawal of NATO-led forces from Afghanistan after a two-decade-long war draws near. However, after the Taliban took control of Afghanistan, thousands of people are gathering at Kabul airport to flee the country in fear of their rule, and countries including the United States have been moving people at a rapid pace since Thursday’s attack. The evacuation operation has resumed. .

The United States has said it has evacuated more than 100,000 people from Kabul since August 15, but is still waiting for 1,000 Americans and millions of Afghans to help US and NATO forces in Afghanistan. US President Joe Biden has described the evacuation of American and Afghan citizens from Kabul as the longest and largest evacuation mission in history.

General Frank McKenzie, who oversees the evacuation mission in Afghanistan, said 5,000 people were waiting to board the plane on Thursday. More people arrived at Kabul Airport on Friday. An Afghan named Jamshad, who arrived at the airport with three children and his wife, said he decided to reach there despite the attacks on the airport. Because he knows there may be more attacks and wants to leave the country with his family before that. Despite the threat of death at the airport, he has no other option.

Meanwhile, millions like Jamshad have been waiting for days at Kabul airport to seek refuge in the West for fear of the Taliban, ahead of the withdrawal of 3,000 US troops from Afghanistan on Tuesday. The Allies began to call off their operations so that the US could evacuate as many people as possible. Britain on Friday completed its final operation to drive out the Afghans.