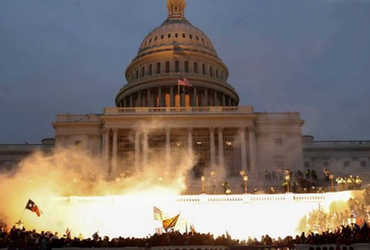 Washington, DT
The most controversial presidential election in the United States took place in 2020. In this election, America saw days that the world’s oldest democracy had never seen before. The root of all these controversies was former President Donald Trump, who could not digest his possible defeat. A new report shows Trump directed the Secretary of Defense to confiscate voting machines in a draft executive order following his defeat in the presidential election.
A Politico report, based on documents from the National Archive, claimed that Donald Trump made extraordinary efforts to prevent Democrat Joe Biden from being elected president. In the draft dated 16 December 2020, the Defense Secretary was ordered to confiscate all machines, equipment, electronically recorded information and material records.
The order also directs the office of the Director of National Intelligence to provide a preliminary assessment of the election within three days and a final assessment within 30 days. The documents were handed over to the US House of Representatives on Thursday after the US Supreme Court rejected a request to stop the National Archives documents from handing over 200 pages of documents to the committee. The documents include diaries of then-President Trump, draft speeches and files from former Chief of Staff Mark Meadows, as well as handwritten notes from January 6.
It’s been a year since the January 6 attack on the US Capitol. However, the incident is still under investigation. The commission of inquiry had first requested the documents in August. Trump’s supporters attacked the country’s parliament a year ago on his provocation. A year after the event, current US President Joe Biden and Vice President Kamala Harris addressed the nation. However, former President Donald Trump canceled his press conference and later issued a statement declaring Biden an “insecure dictator”.
In a nationalist speech, Joe Biden accused Trump of spreading lies. He said that it is true that former US President Donald Trump spread lies about the 2020 elections. He did this because Trump valued power over principle. His arrogance was more important to him than democracy or the Constitution. Trump’s lies are dangerous for American democracy. Attack on democracy a year ago put our Constitution in danger.