Fear in Greece: Fifth day there was a fierce forest fire, many houses were burnt to ashes 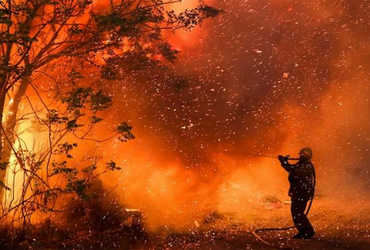 The forest fires in the European country of Greece could not be extinguished even for the fifth day. There is an atmosphere of panic in the surrounding areas due to the fire and some people are being forced to leave their homes out of fear. Six cities have been put on alert regarding the fire. Smoke rises in the sky north of Athens. The flames are so strong that it has reached near the middle.

There are three major wildfires currently raging in Greece. Which is the result of the worst heat wave in three decades. The temperature reached 45 degree Celsius. Meanwhile, a volunteer firefighter died on Friday and at least 20 people were treated at the hospital last week.

A fire broke out on Tuesday in the country’s second largest island, Avia, east of Athens. The fire burned thousands of acres of ancient forest resources that separated the northern part of the country.

Firefighters faced dangerous, unprecedented conditions while battling 154 wildfires. 64 forest areas were still burning at night. Evacuation orders were issued for dozens of villages on the mainland and the surrounding island of Evia, as well as for the evacuation of remote settlements along Athens’ wild coast. Millions of homes and businesses have been destroyed by this dangerous fire. However, officials are yet to provide detailed figures.