Fall of Kabul biggest defeat in US history: Trump 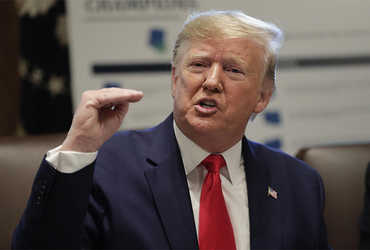 – The opposition started fish with the US President

– No statement from White House about Taliban seizing power in Afghanistan

WASHINGTON: Former US President Donald Trump has lashed out at current President Joe Biden, saying the fall of Kabul to the Taliban without any resistance would be the biggest defeat in American history.

The bid they made for Afghanistan will indeed be a myth, but their decision will be the biggest defeat in US history, the Taliban said in a statement issued hours before the capture of the presidential palace in Kabul. Shortly before the Taliban took control of Kabul, Afghan-elected President Ashraf Ghani fled the country along with his other leaders. Ashraf Ghani is said to have fled to Tajikistan.

Surprisingly, despite the fall of Kabul and the capture of power by the Taliban in Afghanistan, no official statement has yet been issued by the White House. Joe Bide, who is enjoying his vacation at Camp David, needed a video conference with the country’s top national security advisers and discussed the situation. Nikki Haley, the former US ambassador to the United Nations, also called the fall of Kabul and the Taliban victory a major failure of the Biden administration.

It doesn’t always matter what you do but how you do it. No former military officer or soldier’s family would have thought of begging the Taliban for a safe exit from Afghanistan. The sacrifice made by him is very important. Haley blamed the Biden government, saying, “We all know now that there will be very serious dangers and challenges in the future.”