Extreme flood risk has been declared in Louisiana, USA. 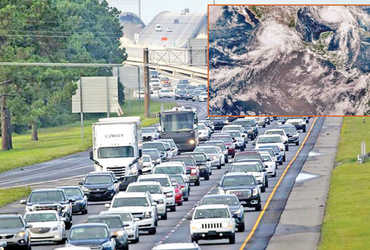 Worst storm in Louisiana history since 1856: winds of 241 kph

Thousands flee from Louisiana and Mississippi amid growing corona epidemic

New Orleans: Hurricane ‘Ida’ in the United States turned into a devastating hurricane on Sunday, causing massive destruction in Louisiana. Not only this, it is also feared to change into the fifth category of the storm. Hurricane Ida has hit Louisiana on the 16th anniversary of Hurricane Katrina.

This is the worst hurricane to hit Louisiana since 1856. Wind speed was 241 km/h when the devastating Hurricane Ida hit Louisiana. Was. This is the second hurricane in the history of Louisiana to have the strongest wind speeds. Ida became more powerful near the Gulf of Mexico. The storm reduced floodwaters in the city of New Orleans and thousands of people were evacuated.

Earlier, the National Hurricane Center predicted that Hurricane Ida could turn into a fourth-degree hurricane in Louisiana with winds of up to 209 kph.

However, when the storm hit the coast on Sunday afternoon, the wind speed was 241 kmph. Was. Earlier on Sunday morning, the storm that made landfall in the western Gulf of Mexico in the western United States increased wind speeds from 72 kph to 230 hours in just five hours.

Those who had faced Hurricane Katrina had started preparing to face Ida. Hurricane Ida has compounded the problem at a time when Louisiana’s delta form of the coronavirus has increased cases and anti-corona vaccination rates are low.

Governor John Bel Edwards said that Louisiana is prepared to deal with the situation and that shelters will be operated with reduced capacity due to Corona. US President Joe Biden has also approved the imposition of emergency in Louisiana and Mississippi due to Hurricane Ida.

Meanwhile, the emergency services officials have opened shelters in many places for the safety of the people despite the danger of spreading the corona epidemic. On the other hand, Hurricane Nora, which formed off the Pacific coast of Mexico, is likely to pass through the Puerto Vallarta region of Mexico and move north.

Due to Hurricane Nora, winds gusted up to 120 kmph late Saturday night. The storm was reported 85 km northwest of Puerto Vallarta. The distance was centered and was moving north at a speed of 26 kmph.

Meteorologists have warned that the storm could cause flooding and landfall along the central and north Pacific coasts of Mexico.

However, officials in the Mexican state of Jalisco said they had received no reports of serious damage. The storm passed through Jalisco before reaching Puerto Vallarta. The US Meteorological Department said that Nora will weaken on Sunday night and move toward the narrow Gulf of California. No major damage is expected.