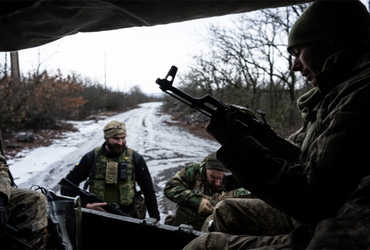 Kiev: Despite declining foreign investment and the normalcy of its people, Ukraine is now eager to find a way out of the war and find a way out through dialogue. However, Russia’s urging over the past eight years to curb rising separatist activity in eastern Ukraine and impose tougher sanctions on Russia has remained the same.

The way the nations of Europe respond to this crisis ensures the security of Europe and its nations.

Ukraine said on Wednesday that diplomatic efforts by European countries had now stopped the war and allayed fears of a Russian invasion. “The way European countries are responding to this crisis,” Ukraine’s Foreign Minister Dmitry Kuleba told reporters after talks with Spanish Foreign Minister Jose Manuel Albres. It determines the security of Europe and its nations.”

They also held talks in Berlin after French President Emmanuel Macron’s visits to Moscow and Kiev. Not only this, he also promised Russian President Vladimir Putin that he would not be the center of attention.

However, Washington maintains that Russia is prepared to invade Ukraine because of a pro-Western stance of more than 100,000 troops near the Ukrainian border.

Speaking on Russia’s stance, Ukraine’s Foreign Minister Dmitry Kuleba said, “Without exaggeration, Russia seeks to avenge the former Soviet Union’s defeat in the Cold War, so today we have to discuss peace and security across Europe. ” Indeed, Russia has been violating international law and the Minx Agreements for the past several years, and therefore should be punished by imposing harsh sanctions.