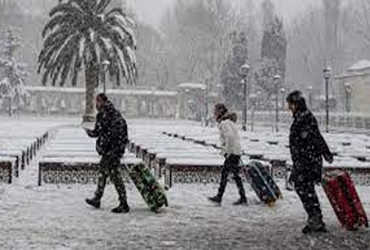 Istanbul Airport, one of Europe’s busiest airports, has been closed due to heavy snowfall and blizzards. Heavy snowfall is causing a lot of trouble for European countries at this time. Schools and vaccination centers in Athens have been closed due to a snowstorm. Some cities are in a state of blackout and transport has been severely affected after a rare snow storm in the eastern Mediterranean.

Advice to people not to travel

Istanbul Governor Ali Yerlikia has appealed to people not to leave their homes to travel unless absolutely necessary, as the weather has worsened due to a snowstorm. Government employees have been given leave after half a day on Monday. In another statement, Governor Ali Yerlikia said that due to the snow storm, trains from Thrace to Istanbul in the northern part of the country have been blocked from entering the city.

Istanbul Mayor Akram Imamoglu said that about 7,400 municipal workers were called to help people and that the municipal office was constantly open and helping people, putting the emergency team on high alert in case of any untoward incident. to take immediate action.