Europeans protest against ‘vaccine passport’, which is at stake 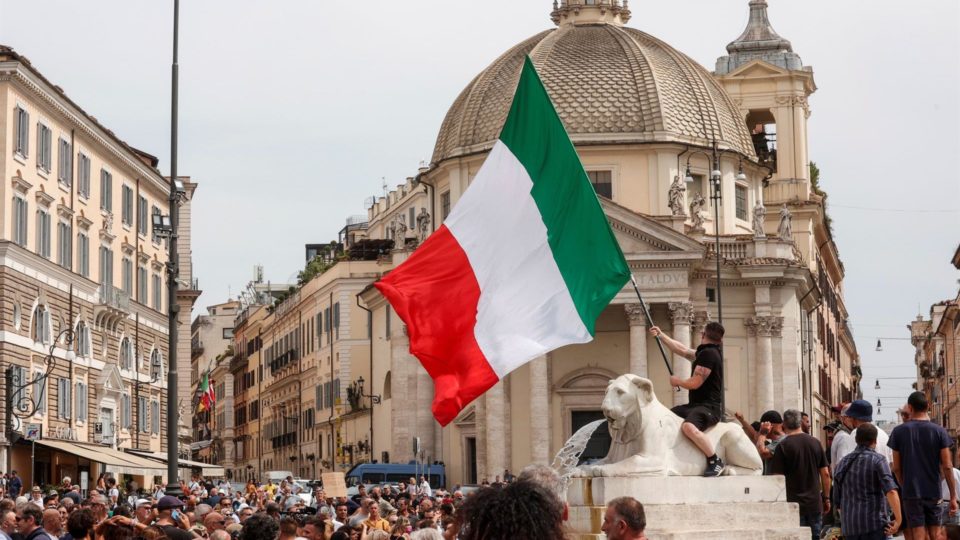 Italians gathered in Rome on Tuesday (27) to protest against the “covid passport”. Photo: GIUSEPPE LAMI / Agência EFE / Gazeta do Povo

After the French protested against the introduction of the “covid passport”, also called “digital green certificate”, it was Italy’s turn to take to the streets last weekend. In the main cities of the country, Italians gathered in the squares. According to the most conservative estimates, in Milan about 9,000; in Rome, at least 3,000; Turin, 5 thousand; Genoa, 2,000; Bologna, 2 thousand; Florence, about a thousand people.

And even this Tuesday (27), demonstrators gathered again in Rome to protest against the obligation to present a digital certificate of vaccination or a negative Covid-19 test to access places where overcrowding can occur.

The European Parliament approved on April 29 this year a proposal to the governments of the 27 countries of the bloc to suspend the requirement of quarantines, tests or self-isolation measures for people who have a certificate of vaccination against Covid- 19. The document is designed to make travel easier across European Union countries for people who have been vaccinated against the coronavirus, who have recovered from an infection, or who have recently tested negative for the disease.

But now that every member country has started implementing the “passport covid” requirement, governments are starting to extend its use to facilities in their own countries.

Despite some “anti-vaccination” members present, the demonstrations organized by social networks were mainly directed against the compulsory use of the “green certificate”. The Corriere Della Sera newspaper estimates that in 80 Italian cities protests took place last weekend. There was no clear political identity among the demonstrators, who on social media used the terms “free citizens” against the “health dictatorship” to mobilize. The newspaper also noted that there were those who associated the idea of ​​the “green passport” with the Nazi swastika, a way of emphasizing that anyone who was not vaccinated would be a kind of second-class citizen like the Jews of the country. In Nazi times, they were forced to sign your ethnicity on their clothes.

However, on the streets there were not only protesters concerned about freedom, but restaurant owners who feared the measure would further harm their businesses, struggling for more than a year to survive amid the health crisis. .

“We are free citizens who want to take back the life of two years ago,” said Umberto Carriera, national secretary of IoApro, a movement of restaurateurs, “the green passport is not the solution, it will not solve not the epidemic. Security protocols exist and we are following them. Another protester told Il Giorno newspaper: “Now they want us to be the sheriffs of the green passport.”

From August 6, the “green passport” with at least one dose of vaccine (or negative test) will be compulsory for all citizens over 12 years old in covered restaurants, and in places where it is consumed at the table, to get to the cinema. and theater performances, to participate in sporting events and competitions, to go to swimming pools, gymnasiums, but also to fairs, festivals, conferences, amusement parks, games halls and participation in competitions. The measures are very similar to those put in place in France, which brought together thousands of French people in protest.

Protests against passports were also recorded in Ireland, the United Kingdom, Greece, Australia and Canada.

Although the government is touting passports as a way to ensure a faster return on savings and to encourage reluctant people to get vaccinated, previous experience of using this system in Israel, a country considered an example in the speed of vaccination against Covid-19, suggests something different.

An article by Rivka Carmi, Asa Kasher, Yoav Yehezkelli, Udi Qimron and Eitan Friedman, all prominent Israeli doctors, criticizes the use of passports, which they describe as “scientifically imprecise and ethically questionable.”

According to them, “an atmosphere of intolerance has taken over. The companies announced that unvaccinated employees would be made redundant. Some universities have banned unvaccinated students from taking classes in person. […] Those who cannot be vaccinated for medical reasons cannot resume a new “normal” life.

Moreover, they point out that the coercion of passports has had a paradoxical effect: “Traditionally, the Israeli public has a remarkably high adherence to routine vaccinations. However, the heated debate over the “green passport”, […] led many more young Israeli citizens – who would never consider refusing a vaccine recommended by their family doctor – to refuse Covid-19 injections. “

Doctors also point out that “covid passports” go against the principles of autonomy, compassion, confidentiality and inclusion of the medical profession.

Despite criticism and protests, no European government has so far mentioned withdrawing from the implementation of the “green certificate”.