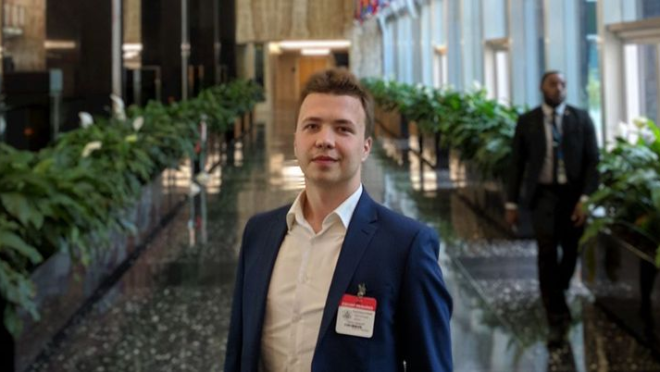 The European Union has imposed new economic sanctions on Belarus and punitive measures on its aviation sector, after a commercial flight was intercepted by a MiG-29 fighter, under the orders of dictator Aleksander Lukashenko, to capture a journalist opposed to the regime.

On Monday evening (24), the 27 leaders of EU member countries condemned the action which forced a RyanAir flight, which was going from Greece to Lithuania, to land in Minsk and demanded the journalist’s immediate release. Roman Protasevich and his Russian girlfriend, Sofia Sapega, a 23-year-old college student. Authorities have also asked European airlines to avoid Belarusian airspace and have banned airlines from the former Soviet Republic from using the airspace and airports of Union countries.

The new sanctions have been applied to people involved in prisons and companies that finance the Lukashenko dictatorship. The European Union had already imposed sanctions on dozens of Belarusian authorities months ago, following a violent crackdown on protests against the results of the country’s presidential election in August, in which Lukashenko was elected for a sixth term. The electoral process was viewed as fraudulent by the country’s opposition and by much of the international community.

The EU statement was released after the publication of a video in which Protasevich appears, claiming he is in good health and confessing that he incited mass protests in Minsk last year. His allies say the testimony was recorded under duress.

Belarusian opposition leader Svetlana Tikhanovskaya said on Twitter that “this is what Roman looks like when he is under physical and moral pressure.”

“I can declare that I have no health, heart or other organ problems. The police are treating me absolutely correctly and according to the law. I continue to cooperate with the investigation and confess the organization of mass protests in the city of Minsk, ”said the journalist in the video, in which he appears to have a bruise on his right eye.

The Belarusian regime said the action was a response to a false bomb threat on the plane written on behalf of Hamas, a militant Palestinian group. A Hamas spokesman denied this claim and said the group had no knowledge of or involvement in the case. Belarusian state media reported that the order was given personally by Lukashenko.

RyanAir chief executive Michael O’Leary called the case a “state hijacking” and said he believed there were spies on the flight.

Also on Monday, Lukashenko sanctioned legal amendments that further restrict the activities of pro-democracy movements and the free flow of information in Belarus. The amendments force organizers to seek permission from municipalities to organize mass protests, making it difficult to organize protests. The measures also hold political parties and associations accountable if their leaders call for an event before it has been authorized. In addition, the law stipulates that journalists cannot act as organizers or attendees of mass events in the course of their work, nor raise funds for events, RadioFreeEurope reported.

Belarusian civil rights organizations estimate that more than 35,000 people have already been detained, temporarily or not, during protests that have taken place regularly since August. Most of the main opposition leaders are imprisoned or exiled in other countries.

The European Union, the United States, Canada and other countries do not recognize Lukashenko as the legitimate president of Belarus.

Who is the journalist Roman Protasevich

Roman Protasevich, 26, was traveling on a commercial airline from Athens to Vilnius, Lithuania, when the Belarusian Air Force sent a MiG-29 fighter to intercept it. The flight, from Irish airline Ryanair, was diverted to Minsk, where the opponent was detained.

Why is the Belarusian regime concerned about Protasevich?

Few independent news sources remain in Belarus, where most media have been forced to shut down after numerous protests against the contested 2020 presidential election.

Protasevich is the co-founder and former editor of Nexta, an information initiative on the social media platform Telegram, which has become a popular channel for Lukashenko’s enemies to share information and organize protests against the government.

He fled the country in 2019 fearing arrest, but continued to disrupt the regime while living in exile in Lithuania, to the point where he was accused in November of inciting public disorder and social hatred.

As a teenager, Protasevich was expelled from a prestigious school for participating in a protest demonstration in 2011 and was later expelled from the journalism program at Minsk State University.

What happened on Sunday?

Protasevich was returning to Vilnius from a conference on the economy in Greece with Belarusian opposition leader Svetlana Tikhanovskaya, according to Greek officials. The flight, which carried around 170 passengers, was expected to last around three hours. However, as it approached the border between Belarus and Lithuania, a MiG-29 fighter had to intercept it.

Lukashenko, who is often presented as “Europe’s last dictator”, personally ordered the fighter to escort the Ryanair plane to Minsk airport after a bomb threat, his press service said. According to the statement, Lukashenko, an ally of Russian President Vladimir Poutine, gave an “unambiguous order” to “turn around and land the plane”.

No bombs were found on board, the country’s police officials said.

Antony Blinken, the US Secretary of State, severely criticized Lukashenko’s government on Twitter Sunday for the arrest of Protasevich. He called it “a flagrant and shocking act to hijack a commercial theft and arrest a journalist”.

“We demand an international investigation and we are coordinating the next steps with our partners,” said Blinken. “The United States is with the Belarusian people”.

What kind of punishment can he face?

The Belarusian regime’s main security agency, called KGB, put Protasevich’s name on a terrorist list. If accused and convicted of terrorism, he risks the death penalty. Charges of incitement to public disorder and social hatred carry a sentence of more than 12 years in prison.

What has been the reaction of the international community?

Again on Sunday, reactions against the Belarusian government’s measure began to emerge between the countries of the European continent and the North Atlantic Treaty Organization (NATO), which includes Lithuania, Greece and Ireland – countries of the European Union. origin, destination and airline of the intercepted flight. Lithuania and Latvia called for all international flights to avoid overflying Belarus as a sanction from Belarusian authorities.

The countries of the European Union met on Monday 24 in Brussels to study the sanctions to be applied against the Lukashenko regime, including the suspension of the overflight of the airspace of the country – since the hijacked flight came from a company and between two countries belonging to the bloc.

Italian Foreign Minister Luigi Di Maio called the case an “unacceptable kidnapping of the state”. “As a government and as a European Union, we consider what has happened to be unacceptable. We are facing a state kidnapping and it is unacceptable.

Latvia-based airline AirBaltic has anticipated any government decision and said it will avoid Belarusian airspace. “We have decided to avoid entering Belarusian airspace until the situation becomes clearer or the authorities make a decision,” the company said in a statement. And he added: “The safety and health of our passengers and employees is the top priority of the company.”

A meeting is scheduled for Tuesday 25 between NATO ambassadors to discuss the forced disembarkation. “The Allies are holding consultations on the forced landing of the Ryanair plane by Belarus, and the ambassadors will discuss it tomorrow,” a spokesman for the military alliance told France-Presse.

Main ally of Belarus, Russia demonstrated on Monday. Moscow diplomacy said it was surprised by “the Western accusations” against the Lukashenko regime: “It is surprising that the West considers the incident in Belarusian airspace as surprising,” said the spokeswoman for the Lukashenko. Russian Foreign Ministry, Maria Zajarova. Russian presidency spokesman Dmitry Peskov said the assessment of the action should be made by international air authorities and declined to give the Kremlin an official position.

What does Belarus say about this case?

Belarusian officials reiterated on Monday that they acted legally when they hijacked a plane with a dissident on board and accused Western countries of presenting “unfounded” charges on political grounds. “There is no doubt that the actions of our competent authorities have fully complied with established international standards,” Foreign Ministry spokesman Anatoly Glaz said in a statement in which he accused the West of “politicizing” the situation.

“They are making baseless accusations,” Glaz added, before saying it was “sad” that the passengers “had faced some inconvenience. And he added:” However, aviation safety standards are a priority. absolute “.

Military arrest of President, Prime Minister and Minister of Defense