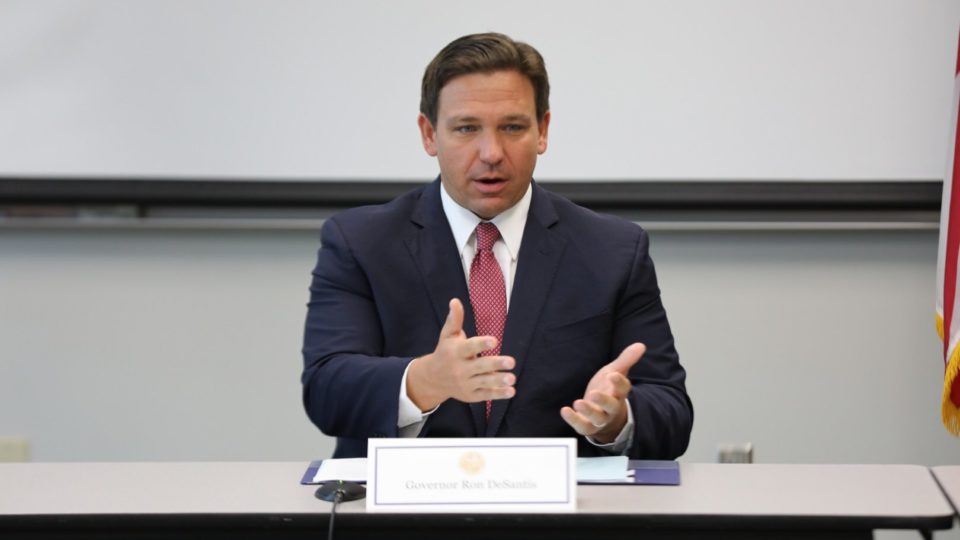 Rapper Zuby has never been a professional athlete. But somehow he holds the UK record in women’s weightlifting. In 2019, shortly after declaring himself a woman, he lifted 238 kilograms, above the records achieved by female athletes in his country. While Zuby’s attitude was an ironic provocation, the issue he raised is serious: Due to inane biological advantages, men have physical superiority over women. And this advantage remains even when the so-called “gender identity” changes.

To avoid these distortions, a growing number of US states have come to appreciate bills biologically prohibiting males from participating in female sports in school. Eight states already have such laws in place: Alabama, Arkansas, Mississippi, Montana, Tennessee, West Virginia, Idaho and Florida. Either way, the law was passed this year after the federal government – under Joe Biden – started pushing for so-called trans rights.

Florida was the most recent state to implement a law ensuring that high school athletes are required to compete with people of the same biological sex, regardless of their gender identity. “As a father of two daughters, I want my daughters, and any daughter in Florida, to compete on an equal footing for opportunities for young women in sport,” Governor Ron de Santis said on June 21. republican, to sanction the law. The proposal was approved by 77 votes to 40.

In Tennessee, the law requires fourth-grade (nine-year-old) students to submit documents demonstrating their gender to participate in school competitions. In practice, the legislation equates “gender” with “sex”.

The text approved in Tennessee mentions, among other factors, that “boys, on average, can be physically stronger than girls, having more skeletal muscle mass than girls and more strength in the upper and lower parts of the body. body. injury to girls if they participate in contact sports with boys.

Laws are limited to school and college competitions because these are matters for state governments. Professional sports associations, on the other hand, being private entities and dealing with adult athletes, have more legal freedom to decide on their own criteria.

The national debate reveals a deep rift between the two parties that dominate American politics. The eight governors who sanctioned such measures are Republicans. In the vote in Florida, all Republicans voted for and only one Democrat did not vote against. In Kansas, a similar initiative was approved by the legislature, which has a Republican majority, but was not sanctioned by Governor Laura Kelly of the Democratic Party.

Even a transgender celebrity, Caitlyn Jenner, has spoken out against the presence of men in women’s sport. “It’s a matter of justice and we need to protect women’s sport in our schools,” said Caitlyn, Republican Party member. When his name was still Bruce, he was a professional athlete and Olympic medalist.

The pressure increased after the Biden government, which took office in January, issued a series of executive orders demanding that men who identify as transgender have the same rights as women. Supporters of this policy claim that a Supreme Court ruling confirms this policy.

In October 2019, the Supreme Court ruled in Boston v Clay County that discrimination based on sexual orientation and gender identity is covered by the Civil Rights Act of 1964. The ruling means that a person cannot be fired, for example, for being transgender. The ruling also takes into account a rule known as Title IX, which guarantees gender equality in school and college sports.

But the Supreme Court ruling doesn’t mean biologically masculine men can compete with women. “Title IX was designed to prevent discrimination and create equal sporting opportunities for women. Allowing men to compete in women’s sports undoes nearly 50 years of progress for women, ”Christiana Holcomb, Alliance for the Defense of Freedom advisor, told Gazeta do Povo. The organization provides assistance to athletes and their family members who feel aggrieved by the inclusion of men in women’s competitions.

Therefore, the legal battle in the US states must continue. “These laws will ensure that women and girls can compete fairly and become champions. We hope that this trend in the laws will continue, so that female athletes across the country can enjoy the benefits of sports competition and have the opportunity to win medals, podium places and public recognition, ”said Christiana.

Kara Dansky, a director of the Women Human Rights Campaign, agrees. “The vast majority of Americans are opposed to men’s participation in women’s sports, so I think we’ll see more laws like these in the future,” she told Gazeta do Povo.

At the same time, Kara laments that much of academia, journalism and even the business environment in the United States has been “captured by the misconception that it is possible for men to become women.” “. The Women Human Rights Campaign was created to defend the rights of women threatened by the advancement of the transgender agenda.

The Human Rights Campaign, an organization that defends the LGBT cause, has already announced that it will challenge laws passed in Florida, Arkansas, Mississippi and Tennessee in court. “Due to the unprecedented attacks and attacks on state legislatures, we have a responsibility to use all available tools to protect the LGBTQ community, including prosecuting states that violate our civil rights,” said Alfonso David , president of the organization.

This year’s Olympics will be the first in history with a transgender athlete. The International Olympic Committee has approved the participation of Laurel Hubbard, born male, in the women’s weightlifting competition. Until the age of 35, Hubbard, who represents New Zealand, competed in the men’s category.

Gabriela Alves, one of the representatives of the Women Human Rights Campaign in Brazil, explains that many sports federations end up giving in to the pressure because the simple challenge of certain banners of the trans movement can generate negative repercussions: “Today, it is very risky to question this movement without being canceled or persecuted. In addition, embracing these agendas is something extremely profitable for these federations, because it is a powerful lobby politically and financially, ”she said.