Effect of global warming, 850 million tons of ice melted in a single day in Greenland 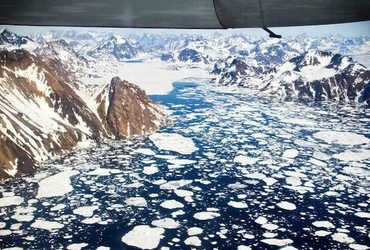 The effects of global warming are now being felt in snow-capped Greenland.

On July 27, a massive snow melt in the northern part of Greenland, doubling the average summer temperature and reaching 20 degrees Celsius. This temperature is too high for the snowy region of Greenland.

On July 27, 850 million tons of ice melted in Greenland. The amount of water formed after the melting of this ice is enough to submerge a big state like UP. Greenland had previously thawed a record 1250 tonnes of ice in 2019.

As the snow from the upper surface is melting, the snow from the lower surface is coming up. Which absorbs the sun’s rays instead of throwing them back. This is making the situation more worrying. Scientists estimate that Greenland’s melt ice has contributed to 25 percent of the world’s sea level rise over the past few decades. If all of Greenland’s ice melts, global sea levels could rise by as much as 20 feet.

Greenland has the most freshwater ice after Antarctica. Its area is 18 lakh square kilometer. The melting of snow here started in 1990. However, now the ice is melting four times faster than before.

The snow starts melting in June. Since June this year, 10,000 million tonnes of ice has melted.