dream of flying car will come true from next year 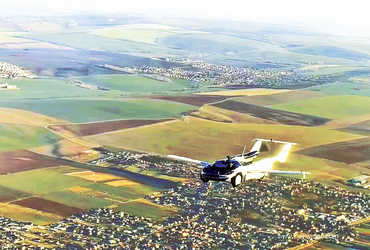 New Delhi:
The dream of futuristic flying car will come true from next year. European country Slovakia has approved flying cars after about 200 landing and takeoff trials. This flying air car can open a new horizon in the field of aviation in the field of personal vehicles. This personal flight can give a boost to the aircar industry. However, information about the price of Flying Air Car is not yet available.

The futuristic air car will be capable of flying at an altitude of over 8,000 feet. Its speed will be 160 km per hour. Now it will be ready for sale soon.

Since the aircraft car has dual mode, it can be converted into a plane while on the road in just three minutes. After successful testing in Slovakia, it has now been officially allowed to fly.

It has been approved for this type of flight after 70 hours of rigorous testing of 200 landings and take-offs, in accordance with European Aviation Safety Agency (EASA) standards.

The test also includes full-range flights and demonstrations, the aircraft’s developers said. Converting from a car to an aircraft, this aircraft craft has shown tremendous stability and with it maneuverability.

He said the pilot was not required to interfere with the flight controls during take-off and landing of the aircraft. The craft has now been certified by the Slovak Transport Authority. The developers said the newly built model could be approved in the next 12 months. The price of this futuristic vehicle has not been disclosed. But it is set to be seen in air and road mode next year.

Aircar’s researcher professor and head of its development team, Stephen Klein, said Aircar’s certification program will lead to mass production of highly efficient flying cars. “Cars were a symbol of freedom 50 years ago, now Aircar has made us free again,” said project co-founder Anton Zazak. Air Car Prototype-1 has a fixed propeller engine of 160 horsepower. The engine was developed by Professor Klein and the Slovak company Kleinvis.