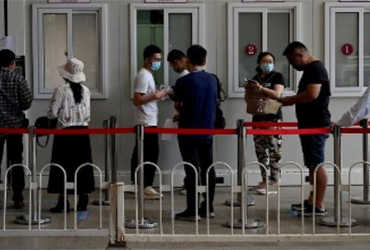 There is an atmosphere of fear in China as the number of corona cases is increasing continuously in the country and some measures are being considered to prevent its spread. Corona cases are also increasing in some areas of the capital Beijing. Due to which the government has taken a big decision to ban travel in the area. Under which people from medium or high risk areas who are planning to return to Beijing will be barred from buying tickets for air and rail services.

Beijing officials said those who are still in medium and high-risk areas. The health code for them will be adjusted in yellow. Who will be given the Green Health Code? They will be allowed to come to Beijing. The Beijing administration’s decision comes at a time when some Chinese cities have seen an increase in coroner cases. Delta variants are on the rise in 15 cities across the country, taking the number of affected people to 500.

Beijing Dexing International Airport has announced the suspension of flights from 15 cities, including hotspots such as Nanjing, Yangzhou and Zhangjiajie. Confirming the decision, Wen Wu, deputy general manager of the airport, said Beijing Dexing International Airport has suspended flights from 15 cities, including Nanjing, Yangzhou and Zhangjiajie.

Meanwhile, the Beijing International Film Festival has been postponed due to the rapid increase in corona cases. An official statement said the 11th Beijing International Film Festival, originally scheduled for August 14-21, is due to the current pandemic in some parts of the country. Postponed for general safety and health reasons. However, the organizers have not announced how long the festival will remain closed.