Don’t forgive IS, kill them one by one: Biden warns 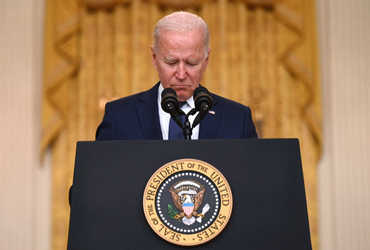 “We will not forget the terrorists and we will not forgive them,” said US President Joe Biden, who killed 12 American soldiers and 17 other civilians in two suicide bombings outside Kabul airport in Afghanistan. We will find and kill each attacker one by one. He should be punished for this attack.

US President Joe Biden further said that there is no evidence of collusion between the Taliban and Islamic State in the attack on Kabul airport. We will continue to rescue American citizens from Afghanistan. We will also drive out our Afghan allies and our mission will continue. Biden observed a moment’s silence and bowed his head in tribute to the soldiers killed in the Kabul attack.

He ordered the American flag to be flown at half-mast across the country. With tears in his eyes, Biden said IS-K or IS-Khorasan was behind the attack near a hotel outside Kabul airport. Biden ordered his commanders to attack IS-Khorasan terrorists, their bases, and seize their assets. “We will give timely response to these IS terrorists at a place of our choice,” he said. Don’t let them win. He also ordered the evacuation of American citizens and thousands of Afghans at Kabul airport by August 31.

The United States and the Taliban have set an August 31 deadline for the withdrawal of US-led NATO forces from war-torn Afghanistan. We will complete this mission within the stipulated time frame. We will not be afraid of terrorist attacks. Even after withdrawing our troops, we will find a way to bring back Americans who want to leave Afghanistan.

He also warned the Taliban in Afghanistan that it was in their best interest to leave the country. They have no faith in the Taliban, but the Taliban have an interest in Afghanistan. They will find a way to keep the airport free even after the withdrawal of US forces.