Disenchantment in the US, one year after Biden’s arrival in the White House 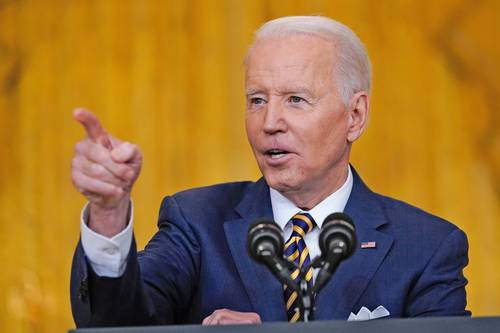 ▲ The US president, Joe Biden, yesterday at a press conference on his first year in office. The Democrat was exasperated at times by the lack of recognition of his successes. Photo Ap

New York., Without a doubt, the most important thing on this first anniversary of the change of power in the White House is that Donald Trump is not president and that his proto-fascist project was stopped (for now) by a massive vote of rejection, but by fulfilling his In the first year of Joe Biden’s presidency, there is a growing discouragement in public opinion, and disenchantment among defenders of civil rights and liberties, promoters of immigration reforms, and those who expected a greater shift in foreign relations.

Biden assumed power after the failure of an unprecedented coup attempt in the United States, which included the first interruption of the sacred principle of the peaceful transfer of Executive Power. He inherited a country hit by crises – health and economic – generated by the mismanagement of the pandemic (causing the unnecessary loss of hundreds of thousands of lives), and politically polarized to such an extent that 12 months later they remain at the center of daily political debate. alarms about the stability of the democratic system in the face of threats of suppression and subversion of suffrage, coups, civil wars and far-right domestic terrorism.

Biden came to the presidency promising a return to normality after the capricious chaos of the last four years with Trump, ensuring the restoration of the institutional within the country while proclaiming the return of the United States as an international leader.

He immediately pushed for a more coherent – ​​and science-based – response to the pandemic with a mass vaccination strategy, tests that are more accessible and now sent to homes for free, and the use of face masks, among other measures.

In the face of the economic crisis, Biden immediately broke with the bipartisan neoliberal consensus of the last 40 years by directly intervening in the economy with massive rescue packages, including direct aid aimed at the most vulnerable.

His economic strategy generated almost 6 million jobs, the highest number recorded in a year, and while the unemployment forecasts for the end of the year were alarming 12 months ago, 2021 ended with an unemployment rate of only 3.9 percent. Poverty has dropped to pre-pandemic levels, and the poverty rate for children has been reduced by 40 percent, the White House reported. Other indicators such as wages, savings and business creation are also positive.

However, economic inequality between the richest and the rest of the population continues to widen to levels unprecedented in a century.

In the area of ​​migration, although Biden presented in his first days the most ambitious reform proposal on the matter in the last two decades and promised to radically change the management of the border, he has generated anger for not investing more political capital in promoting that reform and for the slowness in promoting variations in how the control of migration and refugees is faced at the border.

However, there are substantial and extensive changes, including the suspension of the construction of the border wall, the end of measures to persecute migrants through massive raids in the country, attempts to repair damages caused by the separation of children from their families, a new focus on the root causes of migration and a halt to official anti-immigrant rhetoric.

According to a new analysis from the Migration Policy Institute evaluating the first year, Biden pushed through nearly 300 executive actions on migration (three times more than Trump), six of them on his first day in the White House, many to dismantle anti-immigrant measures from its predecessor and repair damage to the mechanisms for processing refugees.

But despite all his achievements in various fields, as he completes his first year in the White House, Biden faces a bleak outlook. These days he is on the brink of imminent political defeat by failing to pass Senate bills to uphold the right to vote and protect the electoral process that are under siege by Republicans, and that failure will be largely the fault of a couple of senators from his own party. At the same time, his main proposals for social and environmental investment are currently stalled in Congress.

Despite the government’s massive public health effort — Biden says it’s unprecedented — Covid infections are soaring with the new variant. On the economic side, there is now an inflation rate at levels not seen in four decades. Although these conditions, among others, are temporary, they are fueling the negative perception of his government.

Given this, after winning the election with more votes than any candidate in the history of the country and helping to defeat a coup and promising a return to the glory of the American myth, Biden is now among the least popular presidents in modern times to this stage of his administration. His approval rate hovers around 41 percent.

Some analysts point out that Biden for some reason does not enjoy the fruit of his significant achievements, others consider that this has to do with the very complex situation in which he arrived on the national stage, others that he and his team have not been sufficiently effective in transmitting the achievements to the public. Veteran pollster Celinda Lake told The Guardian: It’s an ironic situation where politicians are more popular than politicians, which is very rare. It is almost always the other way around.

In the international arena, Biden fulfilled his promise to restore a certain diplomatic normality, and managed to reincorporate the United States into multinational pacts, including the Paris Agreement on climate change.

But regarding the relationship with Russia, his efforts have failed to reduce tensions over Ukraine, and after a year he has not been able to renew the nuclear agreement with Iran, while he continues to be criticized for the hasty way of exiting the war in Afghanistan.

Others express some surprise at Biden’s belligerence against China and Russia, in some cases returning to the rhetoric of the cold war. Some more express anger that the illegal concentration camp at Guantánamo remains open, that the persecution of Julian Assange and Edward Snowden is proceeding, and that the military budget is the highest in history.

Those who maintained the hope of a turn in the policies towards Cuba and Venezuela, have had to witness the subordination of the White House to the interests of Miami and the Latin American right.

Not everything is under Biden’s control and it is not possible to hold him responsible for matters beyond his power and that were hindered by the Legislative and by parts of the Judicial, especially the Supreme Court, which was installed by conservatives.

But much is within his purview, and liberal and progressive critics — who represent an increasingly key force in the Democratic Party — are calling for him to be bolder in the face of real danger from right-wing forces allied with Trump in power in Washington, something that could already be under way with the midterm elections in November in which, if the trends do not change, the Democrats risk losing their majorities in one or both houses of Congress.

New York., President Joe Biden gave high marks to his government’s management during his first year in the White House, highlighting achievements in the fight against the pandemic and rescuing the economy, but acknowledged that there is frustration and fatigue in this country , and indicated that he did not evaluate well the blunt Republican opposition to almost all his initiatives, in a marathon press conference of almost two hours in the White House.

Reciting figures of what he called an unprecedented public health campaign, which managed to vaccinate three-quarters of the population, along with the generation of 6 million jobs in one year and the reduction of poverty, as well as the approval of his massive infrastructure initiative, Biden insisted that we have faced some of the greatest challenges ever seen in this country in recent years.

He promised: Now we look to the future to win the 21st century, adding his campaign phrase, the best days of this country are ahead, not behind.

Responding to questions about whether he had raised expectations too high at the start of his presidency, Biden assured us that we did not overpromise, and probably overachieved.

He admitted that what I did not anticipate was the Republican effort to do everything possible to stop the initiatives of his presidency, and breaking with his traditional bipartisan position, he charged that that party is now intimidated by a former politician, referring to Donald Trump, but as always without using his name. And he repeated, launching a new message, that the Republicans have no proposals. Republicans for what? They favor what?

Expressing frustration, and even exasperation, at the lack of public and media recognition of his presidency’s accomplishments, Biden at one point exclaimed: No president has accomplished more in his first year.

But accepting some of the responsibility for the failure in communication, he promised that in his second year he will dedicate himself to getting out of Washington more to speak directly to the public to tell them about what we are doing and to be much more active in the legislative electoral campaigns of his party in this midterm election year.

Responding to a question about migration, Biden recalled that when he was vice president in the Barack Obama administration, he spearheaded a multimillion-dollar initiative to help Central American countries reduce the expulsion of migrants, and that he also devoted much of his time to America. America in support of the creation of a hemisphere of democracies, something that was damaged, he accused, by Trump. “It’s not the backyard of the United States… you don’t dictate what happens there,” he clarified.

One of the most recurring themes at the conference was the relationship with Russia. Biden commented that there is still a diplomatic way out, even a summit with Vladimir Putin is still possible, despite the fact that the president assumes that his Russian counterpart will intervene in Ukraine.

But the media got very excited about an unfortunate comment, later corrected by the White House, that a minor Russian incursion into Ukraine might not trigger a massive response from Washington and its allies. The official message is that Russia will pay dearly for any intervention.

In response to a reporter from a conservative outlet who asked him: why are you pushing this country so far to the left?, Biden first laughed and then said that creating jobs and mass vaccinating are not leftist achievements, and then clarified ; “You have tried to convince me that I am Bernie Sanders… I am not a socialist. I am part of the center of the Democratic Party.”