Demonstrations against dictatorship in Cuba continue, even outside the island 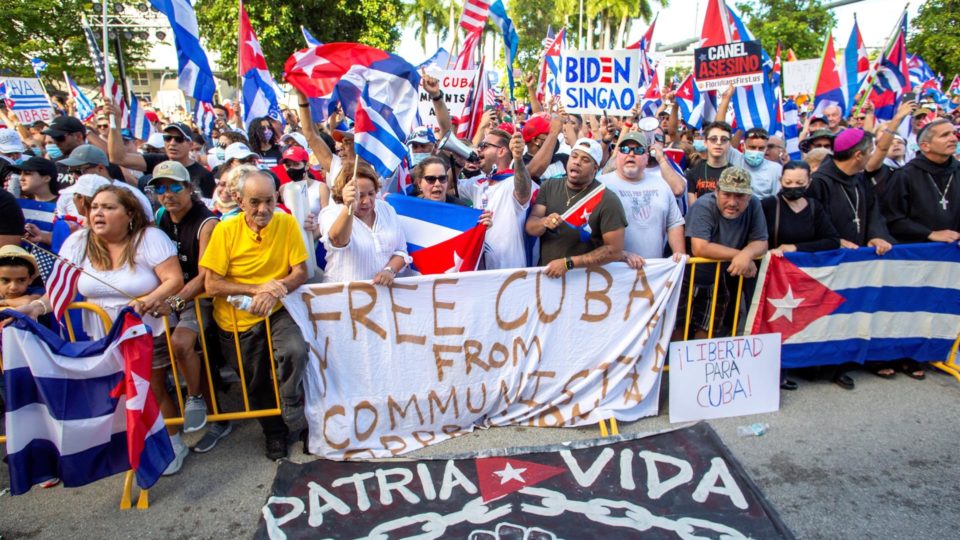 Cuban Americans participate in a demonstration in support of Cuban protesters in front of the Freedom Tower in Miami, Florida, USA July 17, 2021 | Photo: CRISTOBAL HERRERA-ULASHKEVICH / Agência EFE / Gazeta do Povo

As the Cuban freedom protests are stifled by state violence and internet shutdowns, Cubans across the world who have left the country continue to support the island’s protesters.

Over the weekend, hundreds of people gathered in Miami and Washington DC, United States, to call for actions by the United States government against the Castro regime, such as the application of political sanctions, diplomatic and financial against members of the regime. that they coordinate the repression against the demonstrators.

In Miami, Cuban dissident Rosa María Payá called for “solidarity” with the Cuban people, in the form of “actions and not words”.

Outside the White House in the US capital, former Cuban boxing champion Yordenis Ugás said: “The blackmail is over, the dictatorship is over.” “We Cubans are already tired.”

Some Cuban Americans have called for military intervention on the island, a hypothesis already ruled out by Democrats. Last week, the chairman of the US Senate Foreign Relations Committee, Bob Menéndez, said the United States would not make military intervention in Cuba. “Let’s leave that aside because that’s what the Fidelistas want. Those who hold power in Cuba want to promote it,” he said.

Acts of support for Cuban demonstrators also took place outside Cuban embassies in Panama and Chile. In Santiago de Chile, according to the EFE agency, there was a clash between groups against and in favor of the Castro regime. Last week, protests for freedom in Cuba were recorded in several countries including the United States, the United Kingdom and Spain.

repression on the island

In Cuba, since the July 11 protests, the police have dominated the streets of the country. Dissenting voices continue to be dissuaded.

This weekend, a man was beaten and arrested after shouting “freedom” at a regime act in Havana. According to independent journalists, he has been identified as Ernesto Frank Sánchez Aguilar and on Sunday evening it was not known where he was.

In San Antonio de los Baños, the city where the protests against the dictatorship erupted, there is a strong presence of military personnel and supporters of the regime in the streets. According to EFE, access to the city, located 30 kilometers west of Havana, was largely blocked or guarded by security guards on Sunday.