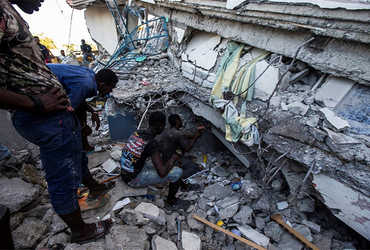 – Adverse impact on rescue operations as a result of landslides

Les Cayes: The death toll from Saturday’s 7.5-magnitude earthquake in Haiti has risen to 18, while the number of injured has reached 200.

The Caribbean country of Haiti has been devastated by the earthquake. Thousands of people, homes destroyed, displaced. In the scorching heat, earthquake victims are living under the open sky.

Natural disaster relief work is facing difficulties amid the Corona epidemic and incidents of violence. Some time ago the president was assassinated in Haiti. Prime Minister Ariel Henry has imposed a state of emergency in the country for a month. In addition to civilian residences, schools, churches and hospitals were also damaged. The earthquake has come at a time when the whole country is battling the corona epidemic.

Trouble may increase early this fortnight as Hurricane Grace could reach Haiti by Monday night. Meteorologists say that this could lead to heavy rains, floods and landslides.