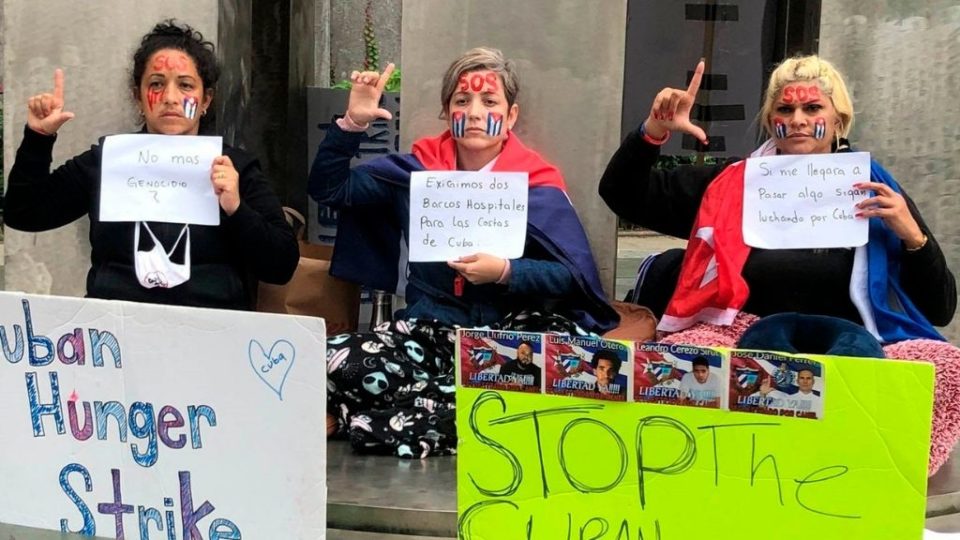 Three Cuban women have gone on hunger strike outside the United Nations (UN) headquarters in New York to demand the attention of the international community to the “grave” situation in their country. Photo credit: EFE / Anisley Pérez

Three Cuban women have started a hunger strike in front of the United Nations (UN) headquarters in New York to draw the attention of the international community to the “serious” situation in their country, “of poverty aggravated by covid -19 “.

Activists Anisley Pérez, Niurka Primonio and Yamisderky Pelier traveled from Miami to New York and called a strike last Saturday (28), in which they drink only water, demanding that the people’s demand for help Cuban be granted.

“We are here to let the world know what is going on,” Perez told EFE, accompanied by her two friends “and sisters for the cause of the liberation of Cuba”.

The women, who have written “SOS” in red on their foreheads, hold papers that say “no more genocide”, “we demand two hospital ships on the coast of Cuba” and “if anything happens to me, keep fight for Cuba “. .

“We will be here until we are heard, sleeping on this hard ground and under the starry sky,” said Pérez, who, like his friends, has relatives in Cuba. Although they claim to be concerned about their families, they said that at this moment “our family is Cuba”.

On July 11, hundreds of Cubans took to the streets to protest against the government of Miguel Díaz-Canel, which they blame for the shortage of food, basic products and medicines, as well as the proliferation of shops. exclusive payments in foreign currencies which are inaccessible to the majority of the population and the usual power cuts.

The three activists urge human rights rapporteurs to expel Cuba from the UN Human Rights Council because “for 62 years they have violated human rights, are silent and commit genocide” .

“Our Cubans are dying every second and the island’s hospitals are collapsing for lack of medicine,” they said, calling for the arrival of hospital ships, in addition to humanitarian intervention in their country.

Cuba is facing a Covid-19 epidemic and is currently one of the most affected countries in the world, according to data from Cuba’s Ministry of Public Health (Minsap).

The women said emails had been sent to several UN delegations in an attempt to spark interest in the difficult situation facing the country.

“We’re going to stay here until they listen to us or put us in jail, but we need something to happen because while they figure out what to do, our Cuba is dying,” Pérez said. .

“I hope God will touch your heart and I am quoting something that is written in stone here: all nations have rights and this is what the Cuban people are asking for,” he said.