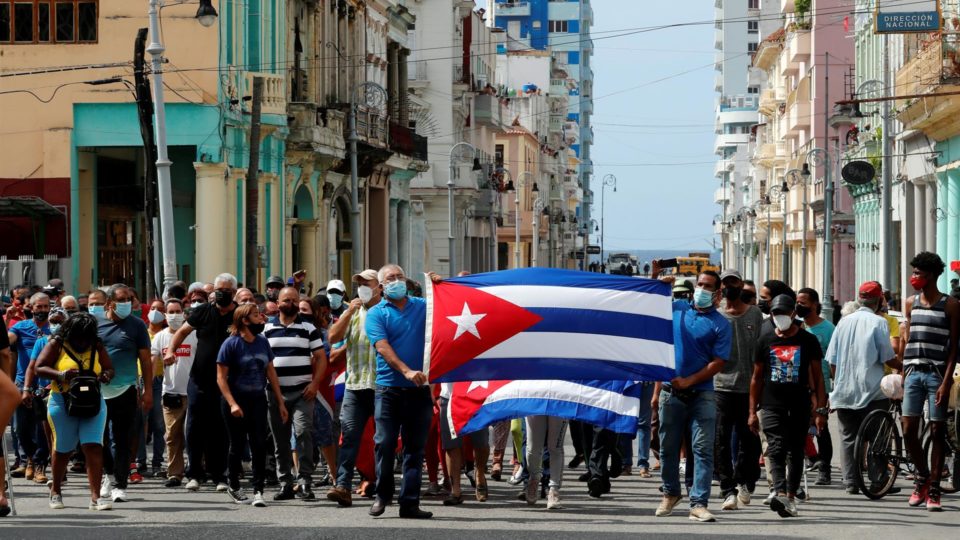 Hundreds of Cubans took to the streets of Havana shouting “freedom” during peaceful protests, which were intercepted by security forces and government-backed brigades, resulting in violent clashes and arrests. Photo credit: EFE / Ernesto Mastrascusa

On Sunday, cries of “freedom!” – “freedom!” – were heard in dozens of towns and villages across Cuba as people took to the streets to protest the Communist government which has strangled the country for 62 years.

This socialist regime has tortured, killed, silenced, denied freedom and driven generations of Cubans into exile, forcing many, including my family, to flee or be murdered. He isolated Cuba from the world and destroyed its economy. Today, Cubans face long queues for food, medicine and basic supplies. They face power outages and government officials may shut down their internet service on a whim – as they did on Sunday, when the regime panicked over the protests.

This battle is personal to me. When Fulgencio Batista staged a coup in Cuba and became a brutal dictator in the 1950s, my father fought against his regime. He was arrested and tortured. They broke her nose and kicked her front teeth until they hung in her mouth. My father decided to flee Cuba, and in 1957 he came to the United States with $ 100 sewn into his underwear. He attended the University of Texas on a student visa and got a job as a dishwasher for 50 cents an hour.

In the summer of 1959, shortly after Fidel took control of Cuba, my father returned to visit his family and was horrified by what he saw. It quickly became apparent that Castro was even worse than Batista. My father’s sister, my aunt Sonia, got involved in the counterrevolutionary struggle and fought Fidel. Unfortunately, she was also imprisoned and tortured before coming to the United States.

Growing up, I heard stories about my father and Aunt Sonia’s struggle for freedom in Cuba. The freedom of the United States was the dream that enabled them to resist the brutality of Cuba. It was and is a beacon of hope for all who, like them, have been oppressed – which is why we saw so many protesters in Cuba fly American flags on Sunday.

The United States must react. In recent days, the world has seen the American people support the men and women of Cuba and their noble struggle for freedom.

It is worrying, however, that the Biden government has not expressed its strong support for those marching through the streets of Cuba. Statement after statement, as the protesters took to the streets, government officials did not unequivocally support the protesters and condemn the regime.

After being criticized for hesitating to take stronger positions, President Biden finally released a statement claiming the protesters were exercising their right to peaceful assembly. It is even false. What the protests have revealed is a communist dictatorship that brutally tries to silence the voice of Cuban citizens.

Additionally, the Biden administration claims the protests relate to access to COVID-19 vaccines. But this ignores the root of the problem: demonstrators shout “libertad” in the streets. They protest loudly against the communist dictatorship which holds back Cuba and wave American flags. And yet Joe Biden and Kamala Harris fail to understand why the freedom we have in the United States is important and why these protesters in Cuba are protesting and risking their lives for it.

Sadly, it’s not hard to imagine why this government is reluctant to support the crowds waving American flags in protest against the Cuban regime. The Obama administration has spent a great deal of time, resources, and diplomatic capital blaming US foreign policy for the plight of Cubans and working to dismantle international pressure on the Cuban regime. The Democratic Party remains committed to this approach.

The courageous protesters who risk everything for freedom are a vivid and undeniable expression against the Democrats’ worldview.

The dictatorial president of Cuba, Miguel Diaz-Canel, declared this weekend that “we are ready for anything and we will fight in the streets”. Without a doubt, in the coming days, I am sure that the Communist government in Cuba will increase its violence to suppress the brave demonstrators in the streets.

The United States must be clear: We support the protesters against the crackdown, and anyone who participates in the crackdown on the Cuban people will be held accountable to us – and to them.

* Ted Cruz is a Republican senator from Texas.