Crude oil spill in Peru spills more than 2,000 barrels of oil into the sea 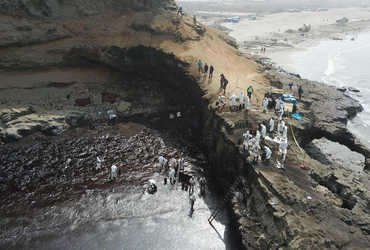 Oil tanker leak in Peru has been a matter of concern for the last 10 days. According to the information received, an oil tanker operated by Repsol was landing at the terminal of La Pampilla refinery in Callao province on 13 January when it overturned. The unloaded tanker is believed to have been rocked by tsunami waves following a volcanic eruption in Tonga. More than 2,000 barrels of oil have spilled into the sea. Hundreds of species of dead fish and birds are found along the coast.

Fishing has been banned in the surrounding coastal area for security reasons. Rescuers were also seen in special white shootings to prevent oil contamination. At least 21 coastal tourism industries have been affected, of which more than 50 million have been damaged. The damage done to the environment cannot be counted.

This information was first revealed to the world on 31 January. The oil spill affected the coastal areas of Costa Azul, Ventanilla, Cavaro and Playa Grande, the archipelago of Guanajuato, islets and capsules in the National Reserve System, covering an area of ​​215 hectares and the Akron Protected Area of ​​12 hectares. , Repsol has decided to complete the clean-up work of the oil spill-affected area by the end of February and will also remove 150 cubic meters of contaminated sand as a precautionary measure.

Repsol said it was not his fault that the situation was responsible for the spill of crude into the sea. The Peruvian government has declared a 40-day environmental crisis in the oil-hit coastal region of Lima. The Ministry of Environment of Peru gave this information. According to the Xinhua news agency, it is the biggest disaster on the coast in recent years. Attempts have been made to minimize the adverse effects of the proposal on Environment Minister Rubén Ramírez.