Coronavirus surfaced again in Wuhan, China: 61 new cases in a single day, all the people of the city will be investigated 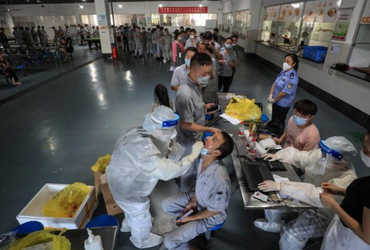 The spread of corona virus is increasing once again in Wuhan, China. Authorities in Wuhan said on Tuesday that they would test everyone in the city of Wuhan for corona. Wuhan is the same city where this epidemic was born in the year 2019. Li Tao, a senior Wuhan official, said everyone in the city of 11 million people would be tested for nucleic acid.

According to the news agency PTI, the Wuhan administration says that seven migrant workers of the city have got corona. Due to which it has spread to the local people as well. In the first lockdown imposed in 2020, China completely controlled the corona virus in the city of Wuhan. At that time, China’s management was also praised worldwide.

After the new cases of coro were reported in Wuhan, the people of Kha city have been instructed to stay in their homes. At the same time, local transport has been partially banned. Corona testing is currently being done on a large scale in Wuhan. After several months, new cases of corona viper are coming to the fore. Which has raised the concern of both the public and the government.

On Tuesday, 61 new cases were reported in China alone. Delta variants of the coronavirus are spreading rapidly among Nanjing airport cleaners. This version has since spread to many cities. As a result, China has once again imposed various restrictions on major cities, including Beijing. These include social distance, quarantine and masks.