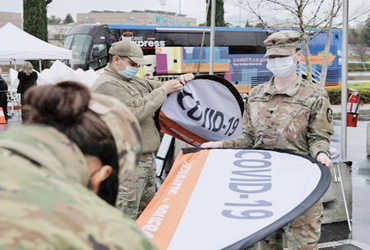 Eight and a half lakh new cases of corona in America, two thousand deaths

Corona infection increases the risk of diabetes in children: a study

Washington: As the corona epidemic is increasing in America, the difficulties are also increasing. The state of California has reported more than 100,000 new cases and 181 deaths, while the state is facing a shortage of coronavirus testing kits. The number of corona patients admitted to the hospital has doubled in a fortnight.

People are getting frustrated due to non-availability of test kits or delay in getting test results. A Stanford University doctor said that if test kits are not available, many people with mild symptoms go to work assuming they are not infected.

But if you do not get the test done then you do not get the facility to quarantine and people go out and infect others. The demand for this specialty has increased significantly as a result of recent corporate scandals in California. In many places, people had to stand in line for hours for the test.

Governor Gavin Newsom said more than 200 National Guards have been deployed in 40 locations. One who assists the clinical staff and keeps people under control. Test results often take up to nine days, which is why some people start paying $100 to get results quickly.

The New York Times reports that the incidence of diabetes in children has increased since the start of the epidemic in Europe. The CDC study examined the large insurance claims database and found how many children under the age of 18 have been diagnosed with diabetes. Researchers used two databases for this study

In America, eight and a half lakh new cases of corona were reported and more than two thousand people died. The death toll from corona worldwide is approaching 3 million. The third dose of corona vaccine in the UK protects the elderly from hospitalization and government advisors have advised not to give the fourth dose.

After the third dose, there was a 90% protection against hospitalization even after three months in people over the age of 5 years. The vaccination committee asked the government to focus on giving the third dose to as many people as possible instead of the fourth dose.

Former Nepal Prime Minister Pushpa Kamal Dahal Prachanda has got corona and is going into isolation. 6-year-old Prachanda and his personal secretary Ramesh Malla also got corona. Leader of Communist Party of Nepal Narayan Kazi Shrestha was also infected with Corona and has been in isolation for 15 days.

According to the World Health Organization, patients recovering from corona infection will be three to five times more likely to be re-infected with Omicron than Delta.

One, getting vaccinated, second, preventing the spread of more infections and equipping the health system to deal with three more cases. For the first time this week, the number of corona cases in Europe has crossed one million in a week. Currently, one in five healthcare workers suffers from depression due to the pandemic. which is a matter of concern.