Corona raised its head in America: Case number close to one lakh for the second consecutive day 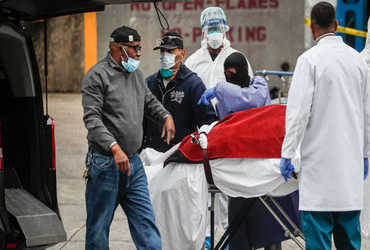 Cases of delta variants increased in Malaysia, Sydney and Tokyo

Tokyo: Corona virus has re-emerged in America. There the daily cases of corona reached close to one lakh for the second consecutive day. On the other hand, the Japanese capital Tokyo recorded more than 4,000 daily cases of corona for the first time, and the number of delta-type cases increased rapidly in Thailand and Malaysia.

Police in the Australian city of Sydney have laid siege to the Central Business District to quell public protests against the crackdown. The police have closed the railway station and taxi traffic. 1000 police officers have been deployed at the checkpoints to disperse the crowd.

In Malaysia also 17,786 cases of corona were reported. More than a hundred people gathered in Kuala Lumpur to protest the government’s response to the pandemic. They demanded the resignation of Prime Minister Muhyiddin Yasin. Demonstrators waved black flags and displayed placards saying that the government had failed to contain the coronavirus pandemic.

With the arrival of 18,912 new corona cases, the total number of corona cases in Thailand has reached six lakh. After 178 corona deaths, there were a total of 4,857 corona deaths in the country. An outbreak of the corona epidemic also spread in Nanjing, China. The infection was caused by an airport cleaner working on a flight from Russia.

Meanwhile, new cases of corona in Florida in the US increased by 50 percent this week. The state health department said that one of the five new cases of corona reported in the country is from Florida. Governor Ron DeSantis said the student does not need to wear a mask. More people have been hospitalized in Florida than in any other state in the United States.

With the death of 409 people this week, the total death toll from Corona has crossed 39,000. The death toll also usually rises within a few weeks of hospitalization. Meanwhile, the CDC said in a study that delta variants produce the same amount of virus in both vaccinators and non-vaccinators.

Of the people who went on leave from Massachusetts to Barn Stable County, 346 cases of infection were reported despite getting both corona vaccines. Of the 133 patients tested, 90 percent were found to have a delta type infection. Unlike other variants, the delta variant also infects vaccinators. And people who are infected with the delta variant can infect others as well.

Meanwhile, the UK government has announced a package of 8.33 crore 80 lakhs to promote cycling and walking exercise after the Corona epidemic. Last year, the number of cyclists had increased significantly. The number of cyclists has also increased this year compared to the last 20 years. The Transport Minister said that the National Cycle Network will also be upgraded.