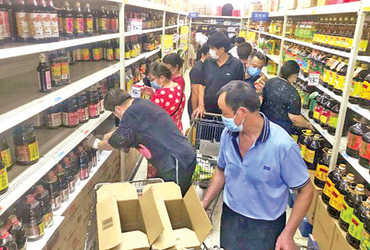 UAE to lift restrictions on transit flights to several countries, including India

Washington: With the re-emergence of the corona epidemic in Wuhan city of China, the testing of 11 million people of the city has started. In Florida, meanwhile, 11,515 corona patients were hospitalized for the second day in a row today, according to the US Department of Health and Human Services.

Yesterday 10,389 corona patients were admitted to the hospital for treatment in Florida. Following the shortage of beds in hospitals across the state, additional beds are now being provided in visitor rooms and corridors.

Significantly, this time the corona patients seem to be relatively young. On the other hand, President Joe Biden has exceeded his goal of giving 70 percent of Americans a single dose of the corona vaccine.

Meanwhile, corona restrictions are being reimposed in most states of the United States. In Louisiana, wearing a mask in public is mandatory for everyone who has or has not been vaccinated. The Florida Medical Center chain said that the number of corona patients hospitalized in Florida has increased by 140 percent in a fortnight.

At the same time, in the Chinese city of Wuhan from where the epidemic started, testing has started on 11 lakh people of the city after the corona epidemic reappeared. New cases of corona have been reported in many provinces of China, due to which there is an atmosphere of panic in China. Despite the onset of the corona pandemic, the city of Wuhan became a corona-free city in June 2020.

Apart from Chinese nationals who returned from different countries, these new cases have come to the fore. Fifteen Chinese provinces have banned people from leaving the city. Meanwhile, the International Monetary Fund has added 6650 billion to its fund to help economically weaker countries.

Meanwhile, the United Arab Emirates will lift restrictions on transit flights from India, Pakistan, Nigeria and other countries from August 5. Tourists presenting negative PCR test 72 hours before departure will be allowed to board the transit flight. A separate lounge will be arranged for such tourists.

Australia’s Qantas Group has put 2,500 Qantas Airways employees on compulsory leave for two months. The airline employs 26,000 employees in Australia. The lockdown has been imposed in Sydney, where Qantas is headquartered, since 26 June. Which has now been extended to August 28.