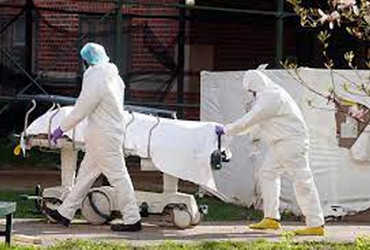 In the last ten days in America, an average of 1.5 million new cases of corona have been reported and more than 600 deaths have occurred.

According to the WorldDometer website, despite the vaccination campaign in the US, the corona epidemic has resurfaced, bringing the total number of corona patients to 3.84 million, while the death toll from corona has increased to 6.44 million.

On an average, more than 1.5 million corona patients are being registered daily in the US at present due to the spread of delta variant infection. This time youth and teenagers are coming under the grip of Corona.

According to the CDC, the number of young people aged 30-39 years and adolescents under the age of 18 is increasing in hospitals as corona patients. At present, on an average, more than 11,000 corona patients are admitted to the hospital daily.

In Sri Lanka too, the total number of corona cases has increased to 3,81,812. While the death toll from Corona was 6,985. Addressing the nation on TV, Sri Lankan President Gotabhaya Rajapaksa said that the country should be ready to make more sacrifices.

A lockdown has been announced in Sri Lanka till 30 August. Rajapaksa said the lockdown would hurt the tourism sector and the economy. He said that most of the coronary deaths were of non-vaccinated and people above 60 years of age who were also suffering from other diseases.