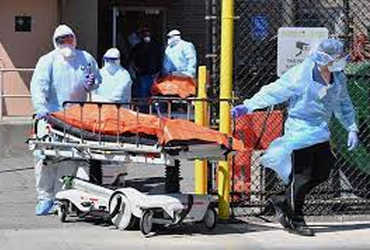 Washington: Once again the corona epidemic is becoming deadly all over the world. In the last 24 hours in America and Brazil, 1,017 and 1,106 people have died due to corona.

There have been 799 deaths from Corona in Russia. According to the Corona data released on the WorldDometer website, a total of 2,73,146 new cases of corona have been reported worldwide, taking the total number of corona cases to 209,619,484. The death toll has risen to 43,99,007 with 5495 deaths.

The spread of corona virus infection has accelerated in America in the last several days, with an average of more than one million cases being reported daily and now the death toll is increasing.

The Biden administration has also made wearing masks mandatory on planes, buses, trains and airports. The Pope has issued a special video message to the United States, describing the corona vaccination as an act of love. He said that the corona vaccine is completely safe and prevents corona infection.

Meanwhile, New Zealand has made wearing of masks mandatory across the country after the registration of six new corona patients today. Not a single corona patient has appeared in New Zealand in the last six months.

According to the findings of a study conducted by the University of Washington’s School of Medicine and published in the journal Immunity, the delta variant cannot defeat the antibodies produced by the vaccine. This is the reason why most immunizers have avoided delta type care.