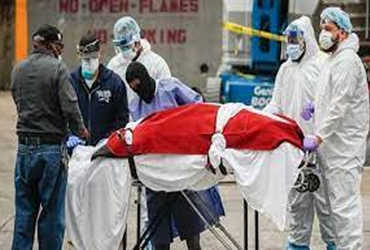 More than 20 percent new cases of corona were reported in Pakistan, death toll from corona in Pakistan crossed 26,000

Washington: As soon as Hurricane Ida knocked in the US, the corona epidemic also took a major turn, with 1,77,568 new corona cases and 1,565 deaths reported in a single day. The highest number of cases were reported in Texas at 26,677 and Florida at 21,392 respectively.

The death toll from Corona in Texas was 314. The total number of corona cases in the United States is 40,520,784 and the total death toll from corona is 6,62,945. Of the total corona cases reported last week, 22.4 percent were cases of pediatrics. The average percentage during the entire pandemic was 14.8 per cent which is now increasing.

Between August 12 and August 26, there was an increase of nine per cent in cases of coronary heart disease. According to a report released this week, of the 8,308 cases reported in Iowa, 22 percent were children. The number of hospitalizations of children in the state has also quadrupled.

The outbreak of the coronavirus pandemic saw a slight increase in the number of new jobs in August, sparking disagreements over a possible Federal Reserve decision to cut funding in the coming months.

More than one million new jobs were created in July, compared to 235,000 in August. Unemployment fell to 5.2 percent. The dwindling number of jobs shows that the delta variant is creating fear and filling vacancies.

In July, 52 lakh people did not get work due to the pandemic, while in August this number increased to 5.6 lakh. The surge in cases due to the highly contagious Delta variant has led to homes sloping down and people’s plans to go to the office and send their children to school.

Employment in the entertainment and hotel business remained unchanged in August, the Labor Department said in a disappointing report. The number of parole employees in restaurants and bars was reduced to 42,000. Employment in the retail trade, construction and health sectors also fell last month. Today 5.3 million people work less than they did on parole before the corona pandemic.

Meanwhile, 3,787 new cases of corona were reported in Pakistan in the last 24 hours, taking the total number of cases to 11,71,578, while the total death toll from corona increased to 26,035. According to the data released by the National Health Service, the death toll from this epidemic in Pakistan has increased to 2.2 percent and 90 percent of the people have recovered from the infection.

Meanwhile, the first air quality and climate bulletin issued by the United Nations weather agency World Meteorological Organization (WMO) warned that restrictions imposed due to the coronavirus pandemic have temporarily improved the climate in urban areas.

The number of certain types of pollutants has increased in many parts of the world. WMO Secretary-General Petri Talas said the coronavirus pandemic is an experiment in unplanned air quality improvements that have improved the climate at the local level but could not replace population growth and a well-planned plan to tackle climate change.

The Geneva-based agency noted in its bulletin that the number of polluters has dropped dramatically since several governments banned public gatherings, closed schools and imposed lockdowns. Researcher Oksana Tarasova said such an effect is short-lived. Currently the cars are not running so the air quality seems to improve but when the cars start running again the air quality starts getting worse again.