Corona death toll in Europe has risen to 20 million by March: WHO warns 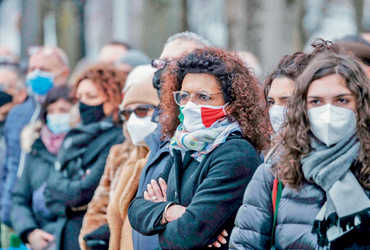 Copenhagen: According to the Europe Office of the World Health Organization, by March next year in Europe of 53 countries, the total number of people who died of corona could reach 7 million. Dr. Kluge, director of the World Health Organization Europe, based in Copenhagen, Denmark, said vaccine protection against infection is waning and that people over the age of 60 should start giving booster doses on a priority basis.

Today the condition of Corona in Europe and Central Asia is critical. We are facing a challenging winter but we must not lose hope. Last week the death toll from the Corona epidemic reached 4200. Which was more than double the death toll at the end of September. The total number of people who died of corona in Europe has reached 15 million, which may increase to 20 million in March.

There are three main causes of corona epidemic in Europe. One, the highly contagious Delta version two, eased restrictions on wearing masks and maintaining social distance, and three large numbers of people in Europe who have not yet been vaccinated. The World Health Organization (WHO) said that 49 out of 53 countries will find it difficult to find ICU space, while hospitals in 25 countries will have a shortage of beds.

At the same time, after increasing cases of corona in Germany, the German army has started considering making the corona vaccine mandatory for soldiers. The Defense Ministry confirmed to a German military blog that an agreement was reached between military officials and military representatives to administer the corona vaccine.

The German army currently has 1215 cases of corona. In Germany, 45,326 new cases of corona have been reported in the last 24 hours and 309 deaths have occurred. Meanwhile, the US Centers for Disease Control and Prevention (CDC) has advised Americans not to travel to Germany and Denmark in view of the increase in corona cases.

The US State Department has advised Americans not to travel to Germany and advised them to get the corona vaccine if they must travel. The World Health Organization (WHO) says the Spanish Research Council has signed a license agreement for antibody testing for coronaviruses, which will allow other manufacturers to conduct antibody tests.

The French prime minister, where Castex turned positive on Monday about Corona, has been the subject of public outcry on social media. Many videos of him wearing a mask and shaking hands with people have gone viral. This is a great example of what not to do during a pandemic.

India and Nepal have reached an agreement to validate each other’s corona vaccine certificates, so that people who have received both the corona vaccines can travel between the two countries with ease. Meanwhile, a total of 258,639,244 cases were reported in the world with 2.5 million new cases of corona and the total death toll stood at 51,78,860 with 4178 deaths.