Controversy over showing bikini and nude model in coffin advertisement 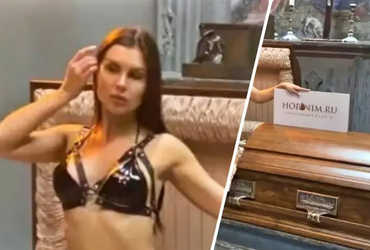 New Delhi: Showing a bikini model in a coffin ad for a Russian funeral company has become expensive. Users are trolling the company on social media. The company featured several women wearing bikinis in a coffin ad. Some women are seen lying on the coffin and some women are nude. This has generated massive controversy.

Some people have started questioning whether sex is sold even in such incidents of death. As soon as this advertisement went viral on social media, users immediately started trolling the Moscow company. The company later shared a video of it on its Instagram and Tiktok.

The video of the company’s announcement has garnered thousands of views since being posted on TikTok and Instagram on January 21 and 22. The company said in a statement that it has “trained agents” who will organize the entire funeral process.

The company has been engulfed in flames on social media after the video of this announcement went viral. One user commented that the company has lost its mind. At the same time, another user wrote that people are forgetting their limits. Another user wrote that we need naked women to announce sad times and extremely private moments. Most of the users have found this ad objectionable.