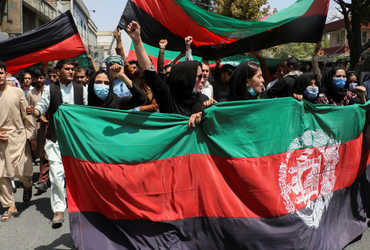 With the news that the Taliban has once again begun killing minorities and people backing former government, US and NATO forces from Afghanistan, fear of a return to the old Taliban regime has spread among civilians. On the other hand, in Kabul, protests against the Taliban by civilians have spread to other cities. Former Vice President Amrulla Saleh has supported the citizens’ protest. Local insurgent groups have freed three districts from Taliban control.

The Taliban, which dreams of ruling Afghanistan, have been challenged by local insurgent groups in Baghlan province. Local rebel groups have recaptured Banu and Pol-e-Hasar districts and are now moving towards Deh Salah district. Many Taliban fighters have been killed and many injured in this fighting.

Not only that, from 2001 to 2021 the Taliban began visiting every home and killing people against them, as well as those who helped the previous Afghan government as well as American and NATO forces against them. Too. The Taliban is looking for such people in cities including Kabul. Such people are mostly officers and employees of the Afghan army, police and intelligence.

This situation comes at a time when Taliban spokesman Jamiullah Mujahid has announced that we have all been forgiven. We do not want any kind of conflict and war in the country. In addition, the Taliban have called on imams in most cities not to leave the country and for unity. But the fact is that the Taliban, who have taken over the country, are now looking for people to harm them at some point.

Meanwhile, anti-Taliban protests in Kabul on Independence Day spread to more cities on Friday, with women leading the protests, recalling the Taliban’s past brutal regime and preventing it from happening again. Women are protesting with the Afghan tricolor in their hands. He tore the Taliban flag and threw it. These civilian demonstrations have been supported by Amrullah Saleh, who himself has become president. He saluted those who stood up for the honor of the country and the national flag bearers. On the other hand, Ahmed Masood, the leader of Afghanistan’s National Resistance Front and son of a former guerrilla leader Ahmed Shah Masood, called on the Panjshir Valley to help the West in its fight against the Taliban.

Meanwhile, talks are on to form a new government. Afghan leaders, including former President Hamid Karzai, are in talks with the Taliban. An official negotiating with the Taliban said the Taliban was looking forward to August 31. According to the Taliban’s agreement with the United States, there is “nothing to do” until the deadline for the withdrawal of American troops. However, he did not elaborate on the meaning of “doing nothing”. It is of concern whether his statement will fulfill the Taliban’s promise to include non-Taliban officials in the next government.