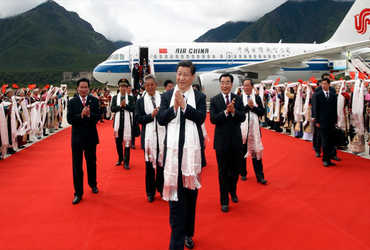 Chinese President Xi Jinping tried Tibet amid the ongoing border dispute with India. This is the first time Jinping has visited Tibet in more than a decade. He assessed the situation by visiting the city from Ning, China, near Arunachal Pradesh, India. Not only this

President Jinping also oversaw the construction of a dam on the Brahmaputra river. China is building the world’s largest dam here, which India has strongly opposed. China is planning to build a massive 60 GW dam on the Yarlung Tsangpo or Brahmaputra River, considered the holiest from Tibet to India.

This dam being built on the Brahmaputra river will generate three times more electricity than China’s Three George Dam. China is repairing roads as well as railways. It has recently constructed a strategically important highway in the middle of the Brahmaputra river valley. The highway connects Madonna County, which borders Arunachal Pradesh.

Chinese President Jinping’s visit to Arunachal Pradesh comes at a time when China has recently started operating the first fully electric bullet train. The bullet train will connect the capital Lhasa and Ningchi. Its speed is 160 kilometers per hour.

Indian security agencies have increased vigil from the navel to the inscription as the movement of the dragon increases near the Line of Actual Control (LAC) at Barahoti in Chamoli district of Uttarakhand state, India.