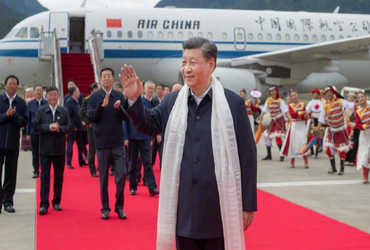 In the midst of conflict with India in eastern Ladakh, Chinese President Xi Jinping made an unexpected visit to Tibet for the first time during his reign and to Ningchi, a strategically important city near the border with Arunachal Pradesh. Jinping arrived at Ningchi Menling Airport on Wednesday. Jinping is probably the first Chinese leader to visit a city near the India-China border. Jinping’s politically significant visit was kept a secret by Chinese officials until Friday.

This is Xi Jinping’s first visit to Tibet after assuming power in 2014. Jinping participated in the 20th anniversary of the peaceful liberation of Tibet as Vice President in 2011. During his visit to Ningchi, 9-year-old Jinping visited the Nyang River Bridge and observed the biodiversity in the Brahmaputra river bed. China has approved plans to build the world’s largest dam on the Brahmaputra river this year during its 15th five-year plan. India and Bangladesh have opposed India’s plan.

Ningchi is a prefecture level town in Tibet and very close to the Arunachal border. China has for years considered Arunachal Pradesh as part of its southern China Tibet. However, India has categorically denied his claim.

According to China’s official Xinhua News Agency, the Chinese president has just arrived in Tibet’s capital Lhasa. The visit of the Chinese President to the Arunachal border comes at a time when there is a tense atmosphere between India and China in eastern Ladakh. India and China shook off troops, tanks and missiles on either side of the disputed site in eastern Ladakh in early May last year, leading to a war-like situation. However, after a series of military and diplomatic talks, the two countries withdrew troops and weapons from the northern and southern shores of Pangong Lake in February. Both sides have now intensified talks to defuse the tense atmosphere along the Line of Actual Control.

Ningchi came into limelight in June when China launched its first bullet train in Tibet. According to a video footage circulated on Chinese social media, Ningchin has been compared to Switzerland in Tibet. However, China has increased the speed of its troops in the area by running a bullet train till Ningchi. The train connecting Lhasa, the provincial capital of Tibet to Ningchi, travels at a speed of 120 km per hour. And it has started 2.50 km single line electrified railway service.