Chinese laborers working with AK-4 to escape terrorists in Pakistan 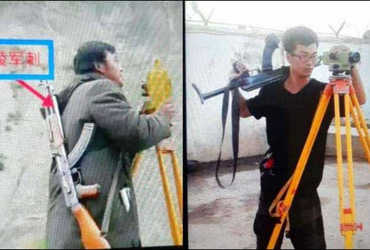 Islamabad, DTE
Terrorists have created a roar in Pakistan. The terrorists who grew up by poisoning Pakistan and China have now become a problem for both these countries. There is a constant threat of terrorist attacks on Chinese workers working in Pakistan.
China Crop. Chinese workers working on the Economic Corridor project are working with AK-7. Chinese workers are now in a state of panic after the terrorist attack on a bus carrying Chinese engineers in Khyber Pakhtunkhwa. China has beefed up the security of its workers after nine Chinese civilians were killed in the attack.
China Crop. At present, the work on the Economic Corridor project is going on. There is a possibility of terrorist attack on the workers. Because of this, China has given AK-4 to its employees. Chinese laborers are forced to work with AK-47 in one hand.
Images of a Chinese employee working on a project were going viral on social media, holding a gun in one hand and a gun in the other. The fear of terrorism has spread so much among Chinese workers that they have to keep monkeys in their hands. Although the Pakistani military protects Chinese workers, many Chinese workers become victims of terrorism. Since then China has created a special protection division to protect workers.
Discontent has also spread among the local people as powerful guns like AK-4 have fallen into the hands of Chinese workers. Protests continue in many parts of Pakistan against China’s project, but Pakistan uses military force to suppress protests.
It is worth noting that only China and Pakistan have poisoned this python named terrorism. China has used its veto power in favor of Pakistan to stop the global ban on terrorists like Masood Azhar and Hafiz Saeed, but the venom of this terrorist cobra is now taking its toll on China-Pakistan.