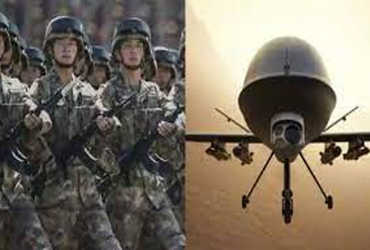 Beijing: China is rapidly equipping its army with technology. Along with increasing the number of soldiers, China has also started allocating a huge budget to equip it with modern technology. China is trying to buy a special type of suicide drone at a heavy price.

Accordingly, China has focused on buying only weapons weighing 10 to 20 kilograms and can be equipped with modern weapons without getting caught on the radar. It was also urged to cover a distance of three to four hours in an hour and its speed should be more than 150 kmph.

According to Michael Peck, suicide drones will be the most destructive drones of the 21st century. Given its long-term use, China is already looking to buy drones that can be equipped with modern suicide weapons.

Such drones can bomb enemy military targets without being caught on radar. Even if the drone crashes, it explodes, so breaking it is also dangerous. China has kept a separate fund for this, as well as China has started harassing the celebrities of the country.

China has tightened its grip on businessman Jack Ma, actresses Zhao Wei, Fan Bingbing, Zheng Shuang and others. A writer named Jamie Seidel claimed in an article that Chinese President Xi Jinping believes that these celebrities dance at the behest of America and that they are agents of all Western countries, hence they are harassed. Jack Ma, Zhao Wei have mysteriously gone missing by the Chinese government. He hasn’t been seen for months.

After the death of 9 engineers, China stopped all the projects working in Pakistan