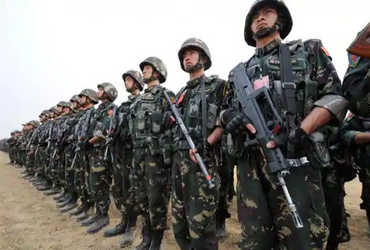 China has been hatching several conspiracies since its defeat on the eastern Ladakh border against India last year. Considering the fact that Tibetan youth can play a vital role in fighting India in the Himalayan mountains on the borders of eastern Ladakh to Arunachal Pradesh, China has made it mandatory for one member of every Tibetan family to become a soldier. China is forcibly recruiting these youths into the People’s Liberation Army. China has a malicious intent to recruit and recruit these youths against India’s Tibetan presence on the Line of Actual Control (LAC).

Contrary to expectations in eastern Ladakh, India has given a befitting reply to China and has captured strategically important positions. Frustrated by Chinese intrigues, India has refused to withdraw from all major places until China withdraws its troops. India and China have been face-to-face for more than a year.

It is during this time that China realizes the importance of Tibetan youth in fighting India. As a result, China has begun recruiting Tibetan youth into its People’s Liberation Army. China has made it mandatory to send one member of every family to the army in Tibet. Not only this, these youths of Tibet also have to go through the test of loyalty.

According to a report, China wants to strengthen its position on the Line of Actual Control at any cost. That is why he has issued a decree to forcibly recruit Tibetan youth as soldiers against India. According to media reports, China is also preparing for a special operation on the LAC through these Tibetan youth. For this, regular training is being given to these new soldiers.

Meanwhile, India and China will hold talks with the Corps Commander of the 15th Phase on Saturday to reduce tension along the Line of Actual Control in eastern Ladakh. Indian military sources said that the Corps Commander-level talks will be held in Moldo, the Chinese side of the LoC, from 10 am on Saturday. The talks could focus on withdrawing troops from areas such as Hot Springs and Gogra Heights.

India and China have so far held 11 rounds of core-level talks since last year’s violence in the Galwan Valley in eastern Ladakh. In view of the talks, troops and artillery have been withdrawn from some places, but the deployment of the army is still going on in many key areas. The last round of talks between the military commanders of India and China was held in April.