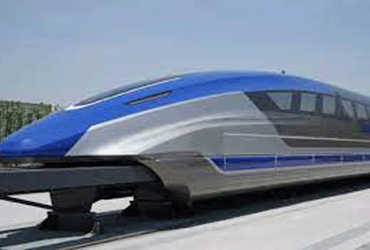 Beijing: China on Tuesday unveiled a super high speed maglev train. According to Chinese media reports, a train running at a speed of 600 kmph is seen floating slightly above the track of the maglev train. China has developed this train with its own technology. If bullet train covers the distance from Ahmedabad to Mumbai in two hours, then maglev train covers this distance in one hour.

This train was built by China in the coastal city of Qingdao. The train is seen floating on the track with the help of electromagnetic force. Their coaches do not touch the tracks. This train is also called floating train.

China has been using this technology in the transportation sector on a limited scale for the past two decades. There is a short line for maglev trains in Shanghai. The train travels from the city to the main airport. However, China does not yet have an intercity or interstate or maglev line. Research is being done for this line in some cities of China such as Shanghai and Chengdu. The train travels at a speed of 600 kmph. It takes him an hour and a half to travel from Shanghai to Beijing. It is worth noting that the distance from Shanghai to Beijing is more than 1000 kilometers. If a plane takes three hours to reach anywhere, a faster train will take five and a half hours.

The fastest maglev train in China was introduced in 2003. Its maximum speed is 431 kilometers per hour. It connects Shanghai’s Pudong Airport with East Longyang Road. Countries like Japan and Germany are also planning to build maglev trains there. However, due to the high cost of building its network, many countries have abandoned the idea.