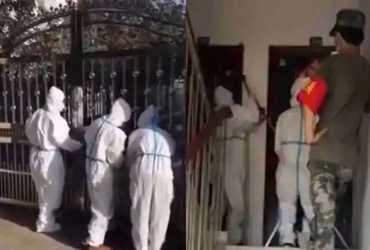 There has been a sudden spurt in the case of Corona from the Delta variant in China, due to which the Chinese government is confused.

Now videos are coming out on social media of the government feeding people at their homes. In one such video, Chinese officials wearing PPE kits are seen closing the door of a house with an iron rod. So that no one can go inside or outside the house.

According to a Taiwanese media report, as soon as the cases of corona increase, the process of locking people in their homes has been started. In some cities of China, cases of delta variants of corona virus have been increasing for the last few days.

In another video, it is being claimed that if a person opens the door of his house more than three times a day, he will be sealed by the authorities and a video shows a door being sealed. At the end of which it has been announced that people are not going out.

The video was first uploaded to a Chinese social media site and then to Twitter and YouTube.

An estimated 94,260 cases have been reported in China so far, of which 87,000 have been cured. About 40 percent of the population in China is vaccinated.